First day of the rest of your life

Regular readers will know that I had an absurdly expensive and extended education. Primary school, prep school, secondary school, university (BA), another university (PhD), University of Life (Blob). This has had both good and bad aspects: a) an asset at pub quizzes b) emotional cripple. For neither of my degrees did I dress up medieval (silly hat, pointy shoes, gaudy gown). I might have done it for my parents but I deliberately went to college in a different country, so it would have been faff for everyone. Formal graduation also cost money but my main reasoning was that such ceremonies were a bourgeois charade and/or a silly anachronism, so I probably scotched any suggestion that my graduations should be a family affair.  I have been to graduations every year at The Institute, however, because I have better manners now and more empathy: students want their folks to meet their teachers and I am moderately interested in seeing where they came from. It also gives me access to a bunch of data to analyse I - II. And an opportunity to graze some canapés! For a college (it used to be a Regional Technical College is now an Institute of Technology and will be a Technological University) that is less than 50 years old it is damn-fool silly to confer degrees in faux-medieval costume; so I put on a jacket and tie, sit in with the parents and boycott the academic procession.

aNNyway, yesterday morning I went to my first ever 'Commencements' in Trinity College Dublin. TCD is by far the oldest university in Ireland, and they are hot for tradition, archaicism, and dressing up medieval. The real name of the institution is The College of the Holy and Undivided Trinity of Queen Elizabeth near Dublin. They call the terms Michaelmas and Hilary rather than Winter and Spring, the boss is a Provost rather than a President and graduation is called Commencements not Graduation or Conferring because leaving Trinity is seen as a start rather than a finale. This was all explained by The Registrar as a warm-up to the ceremony proper. She also explained that the entire ceremony would be rendered in Latin! making the claim that when TCD was founded in 1592, Latin was an all-inclusive lingua franca which could be used for dialogue whether you came from Bologna or Bristol. Hmmm, true-dat but it is now 425 years later and nobody - nobody - in the room was fluent in Latin so using that language was now exclusive and alienating. Ironically, for inclusivity, Trinity employs a signer for the hard-of-hearing, so the deaf understood better what was going on than the rest of us. And no, the signer isn't fluent in Latin either: he's working off an English translation - although probably using Irish Sign Language not British [big difference].

I was in TCD because one of my project students at The Institute went on to do her  12 week work placement internship in my old Comparative Immunology lab in TCD and stayed on to work up the project [on olfactory receptors in dolphins] for a M.Sc.  She stuck at it and wrote it all up and was in medieval clobber [a snip at €40 for a couple of hours] to Commence the rest of her life.

Now here's an important multicultural issue that is buried in the use of a deaf dead language. Proceedings are signed off with an envoi "Valete senatores, non diutius vos morabimur; valete candidati novis honoribus decorati; valete et vos, hospites acceptissimi. Comitia solvantur in nomine Patris et Filii et Spiritus Sancti."   . . . in the name of the father, the son and the holy ghost??? We're all inclusive for the deaf [N = 380,000 in Ireland] but divil-and-all for the No-religions [N = 280,000] or Muslims [N = 50,000], of which 'my' candidate was one.  I've had a peg at this unthinking religiosity in our local Credit Union. Let me also say that Sign Language is as opaque as Latin to me and Pat the Salt who are both hard-of-hearing. 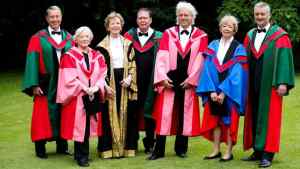 That done I went off to lunch with Dau.I who works but a half day on Fridays. That was very nice - we went to the student dining hall - called The Buttery in Trinity! - for cheap and cheerful fish'n'chips. By the time we had finished catching up - since last Sunday in Cork two hours had passed and I noted that a crowd, fat with photographers, was gathering again in Front Square. Turned out that Bob Geldof was getting a celeb Honorary Doctor of Laws Degree. Other important people [see above with President Mary Robinson] were also getting tribbed. When the procession trooped past, the paparazzi called "Bob, Bob" and Geldof turned to the cameras to wave. Me-the-Bob muttered to Dau.I " My Public, my Public". The nearest photographer rounded on me and said "You cynical old man . . . but I do agree" and went off to his next assignment. As must I.
Posted by BobTheScientist at 07:22