I'm on a bit of a drug and nervous system jag at the moment, trying to follow up a number interesting stories I've heard about from the family and on the blogosphere. In order to make sense of these I've had to refresh my notes in neurons, neurotransmitters, synapses and the like. 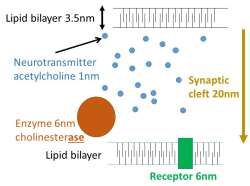 It's quite hard to find an explanatory picture of the synapse between two neurons that is clear and to scale . . .so I had to make my own [above, clipped from my Human Physiology lectures]. Scale and relative size is, for me, important; but it is weepingly difficult to get my students to agree. Students going for a second (MSc) degree are better than my 1st Year Pharmacy Techs at working out that insulin must be smaller than the pancreas. Neurotransmitters NTs are small molecules which communicate between two neurons by crossing the synapse between them. One important aspect of the picture is not included because it is much too big and that is the axon width at right angles to the synapse width [that is 20nm as shown in the picture above] . The width of each face of synapse is about 2μm or ~100x the space between the neurons. That is why we call the gap between neurons a cleft - it is long and narrow and may take a while to escape from.

We know of about 60 chemicals that act as neurotransmitters . . . including
The human body runs as a very tight ship: no idlers or supernumaries are tolerated. Indeed, lots of the crew are double-jobbing. NTs glutamate and glycine are also used as structural components for proteins. Adrenalin acts as a hormone [defined as something that acts at a distance greater than 20nm from its site of production). Histamine controls the leakiness of capillaries - including a running-nose. Anti-histamines will dry up your snuffles, yes; but also cause drowsiness because histamine neurons regulate alertness in the brain. And we don't know the half part of how the molecules interact with each other and with their receptors.  This is part of the reason why drugs have so many side-effects and why each drug will require a cost-benefit analysis to determine if it has overall any benefit. You don't want to fall asleep at the wheel of your car because you're really down on your hay-fever.

But back to the NTs; having completed their task they have to be processed lest they continue to stimulate their receptor until that cell runs out of energy or over-heats and blows up. There are four main ways in which this is achieved:
Now you-and-me-both we're in a better position to understand SSRIs [selective serotonin reuptake inhibitors] and anticholinergics
Posted by BobTheScientist at 07:45