I was reading about the tales of Sir Charles Malcolm's feats of derring-do as a naval officer. He was part of the final invasion of Metropolitan France in the Napoleonic Wars: a raid on Abervrach in Brittany in which the Brits captured a number of vessels in the harbour and sailed them out for prize money. That was on 18 July 1815, a full month after Waterloo and three days after Napoleon had surrendered to Captain Maitland on HMS Bellerophon off the coast of Rochefort. It was lucky for Malcolm that there was no radio in 1815 because the war effectively came to an end on 15th July 1815 500km to the SE on HMS Bellerophon. 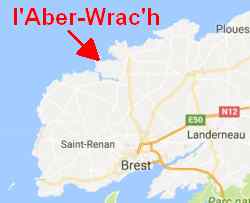 Abervrach? I asked, that looks peculiarly Welsh and it is because what we now call L'Aber-Wrac'h is the most Northerly of the rias of La Côte des Abers, the multiply indented coast of Brittany formed when the valleys of numerous rivers were flooded with sea-water at the end of the last Ice Age. Ria is the technical term to geologists - that word has been corralled from Galician=Gallego where a similar coast line is found. And, of course, both places were the End of the World Cabo Fisterra or Cabo Finisterre [ES] for the Iberian version and Finistère which is the département marking the end of the Breton peninsula. I've been to Cabo Fisterra with The Boy and drunk a toast to the setting sun in super romantic circumstances.  The nearest we've got to Finistère was a holiday we spent in a gîte in the arm-pit of Britanny between Nantes and La Rochelle in 1984. The gîte was a cottage in a marsh; the floor of the garage was 5cm deep in seep for the whole week we were there; and the mosquitoes were the size of humming birds.

Aber and Inver are essentially the same word in the two branches of Celtic. I've given a short explanation of the difference between P-Celtic (Breton, Cornish and Welsh) and Q-Celtic (Irish, Manx and Scots Gaelic) languages and how a consonantal shift made it harder for people from different parts of NW Europe to communicate. Aber is very common in Wales: Aberfan, Aberdovey, Aberystwith but is outnumber 3:1 in Scotland by placenames beginning Inver-.  The Aber-s are mainly in the East = Aberdeen while the Inver-s are N and W = Inverness.

Mais revenons nous à la Bretagne! Charles Malcolm's raiding party cunningly landed upstream of the harbour at Kerzalou. The landscape is peppered with Ker- names: Kerhavell, Kerbérénez, Kerougoun and Kergongan are all within a couple of km of Kerzalou.  So what have got? All my info is from Claude Evans at U Toronto and Pierre Flatrès [fr.wikipedia] at  Université de Haute Bretagne.
Somewhere we have a photograph of a very happy Pat the Salt drinking a glass of cold white sitting in a hot bath in Plouhinec on the South coast of Brittany. For a few years he ran a hotel in Kilkee = Cill Chaoineadh Ita [the church of the lamentation of Saint Ita] in County Clare which could claim to be Ireland's Finisterre as the next parish West is L'Anse aux Meadows [prev] in Newfoundland. aNNyway Pat and Souad were instrumental is getting the town of Kilkee twinned with the commune of Plouhinec in the 1980s. When they retired in the 1990s, the family clubbed together to send them to visit their old drinking buddies in Brittany.
Posted by BobTheScientist at 08:01