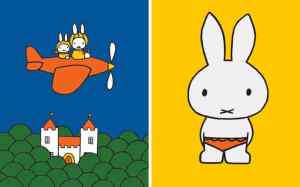 Dick Bruna died in his sleep last Thursday 16 Feb 2017. He was 89.  In 1955 he created Nijntje. A baby rabbit = konijntje had appeared in their lives when they were having a holiday in the dunes near Egmont aan Zee. The baby rabbit srarted to feature as the star of stories he used to tell his his infant son Sierk, and eneventually morphed in a super cute minimalist white rabbit in a series of children's books. His father was in publishing = A.W. Bruna & Zoon. We met Miffy when we lived with our own infant son in Utrecht and Rotterdam in 1979. I think the first book we bought there for The Boy was Miffy goes Flying [Above L]. In his youth Dick Bruna hung out in Paris with Matisse [bloboprev] and Picasso and declared that Matissse's late collages were a primary source of his primary colour style. There are no car-chases in Miffy, no down-your-throat lessons, just simple pleasures and normal events. Miffy is in a quintessentially Dutch way gezellig.

Dank U wel, Dick: petje af!
Posted by BobTheScientist at 11:22