What is it about British blokes and boobs? Do we really fancy the enormous variety? All of us? Is it a cultural thing from decades of page 3 women in the tabloid press or some sort of trigger to the autonomic nervous system or a fine example of run-away evolution driven by sexual selection: like peacock feathers, bird-of-paradise tails, or bright blue baboon buttocks. There is clearly a lot of scope for investigation but you'll have to go to the sister channel boobthescientist for that. 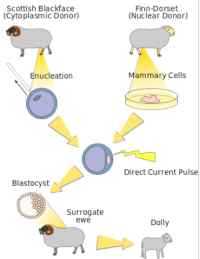 On the other hand, today is the 20th anniversary of the announcement of Dolly the Sheep who had been born the previous 5th July 1996. Dolly was the first large mammal to be cloned from an adult cell. See L for the cloning process that involved 3 mothers for one small, desperately cute, lamb. The cell that provided the chromosomes was from the mammary gland of a mature Finn-Dorset ewe and Ian Wilmut, the research team leader, really wanted to acknowledge the donor tissue by tribbing the top-heavy generously endowed singer Dolly Parton.  At the time I though that was puerile in a snk snk fnarrr Viz sort of way but maybe that's just because I'm a bit priggish. The power behind the publicity facade was Keith Campbell, a developmental biologist, who had produced a pair of cloned lambs Megan and Morag the year before. But M&M were cloned from embryonic cells which were not fully differentiated. So the process was easier. Was it the name? was it a really effective press release from the Roslin Institute? Was it Wilmut's willingness to give a sound-byte or ten? Whatever, Dolly became an international megastar almost on par with her Parton namesake.  The switchboard at Roslin went white hot as it fielded 3,000 incoming calls in the succeeding days. Wilmut went on to secure a knighthood from a grateful country because he was The Face. Campbell, ten years younger, was later acknowledged to have done 66% of the work but didn't get the title. Wilmut, Campbell and Shimya Yamanaka did go on to share the 2008 Shaw Prize for Life Science and Medicine . . . and $1 million: "for their works on the cell differentiation in mammals, a process that advances our knowledge of developmental biology". Yamanaka has won many other prizes including the 2012 Nobel for his work on converting mature cells into stem cells. 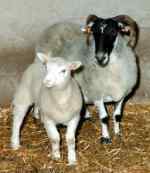 Clearly, it is better to have an adult donor because the full set of desirable qualities will have been compared across many sheep and hundreds of identical super-sheep can be generated from The One. This is better than going back to the genetic lottery each generation because that mix will persist in churning up undesirable qualities or combinations of genes. It is standard process in population biology called regression to the mean: the offspring of the elite cannot be more elite than their parents so look nearer to normal. But you have to be certain-sure that the mix you go with is indeed The Best rather than only Best in the few traits that we can, or care to, measure. For sheep this might be about fleece quality, or weight-gain from weaning, or docility. But you should also try to factor in desirable qualities of disease resistance from a fizzing-good immune system. It's also handy to set it so that the cloned lamb [Dolly R with birth-mother] is genetically different from the surrogate mother. The white face could not be the genetic offspring of the Scottish blackface.

Ironically, Dolly contracted JSRV [Jaagsiekte sheep retrovirus] one of the many, many viruses to which sheep are prey [prev Schmallenberg]. This after a short happy life consorting with David the Ram to produce 6 of her own lambs: called Bonnie, Sally, Rosie, Lucy, Darcy, and Cotton, as you ask. The JSRV developed into lung-cancer and Dolly was put down in 2003. There was much critical talk that the diseases she contracted were the act of an angry god for upsetting the natural apple-cart but that's very unlikely. Dolly has four identical twin sisters Daisy, Debbie, Dianna and Denise who haven't yet gotten JSRV or arthritis. Dianna? What sort of a name is that? I bet it's to scotch any idea that Diana, Princess of Wales is being disrespected á la Dolly Parton. You wouldn't want to rile up the Windsor family - they give out the knighthoods.


Posted by BobTheScientist at 07:49