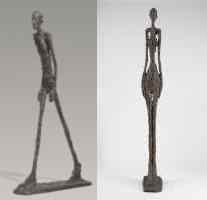 On 3rd February 2010, a cast of L'homme qui marche I by Alberto Giacometti sold at auction for an unprecedented £65 million. Rich people love Giacometti the way the Japanese love Vincent van Gogh, and it's a pity so little of the loot finished up in the pocket of these artists before they pegged out. The folding money seems to stick to the fingers of some thoroughly disreputable creatures like Roland Dumas, champagne socialist and Foreign Minister in the government of his crony François Mitterand. He was convicted in 2007 of ripping off the Giacometti estate when he was executor. I guess Giacometti wouldn't have known how to spend lotto money if such a windfall came his way. L'homme qui marche I in several different castings and so is 'worth' rather more than £65m. That may remind you of a piece I wrote about Edvard Munch's Der Schrei der Natur aka The Scream which exists in 4 different versions. Why so many repetitions? It seems that going at the same theme again and again until all passion is spent is what drives a certain type of artist forward like our friend Viv O'Kelly down Andalusia way. 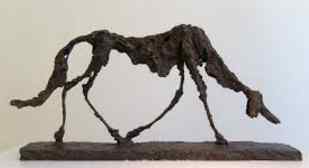 I show one of the L'homme versions above. There is something super-dynamic about it - a purposeful trudging into the future. In contrast I've paired the restless walker with Grande Femme Debout I which like all Giacometti's women is rather frighteningly passive: still, unattainable and so, so thin. Giacometti used to disconcert his sitters as he cut away more and more in his search for some essential core of what 'woman' meant. As a commentator put it "on the notion that the essence of an individual persists even as the body appears to vanish" One of his friends said that Giacometti would reduce a subject's head to the blade of a knife. Brilliantly he captured the essential cur in his bronze Chien [R]. Here you can smell the mange as the beast trots across a post-apocalyptic landscape looking for something disreputable in which to roll. 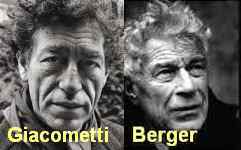 I don't even know the language, so I'll turn to the late lamented [Paris Review Obituary; Obit in The Blob] John Berger, who had a thing or two to say about The Thin Man. Do you think they look a little like each other? But for the fact that Berger was born 25 years later, you might think they were twins separated at birth [bloboprev for the concept]. ANNyway, you should take this opportunity to view a few more of Giacometti's sculptures as a unique Way of Seeing humanity through some rather peculiar eyes.

Chat - L'homme au doigt - Three men walking.
Bilingual Fr/En people may get something out of a 13m film made in 1967 the year after Giacometti died.
Posted by BobTheScientist at 08:05