I have been known to rant on about the relative size of things [I - II - III]: I find that knowledge really get me a handle on how things work. It helps if you can internalize the fact that the pancreas must be bigger that insulin; in the same way as Ford's factory in Dagenham is bigger than any one Ford Mondeo constructed there. A typical bacterium is 1μm = 1 micron in diameter; while a red blood cell is 10μm across. But in matters of size the volume or mass - the cube of the linear dimensions is often more useful. That r.b.c., for example is 1000x the volume of the bacterium.

This was all in the front of my thinking on Tuesday night 21-02-17 because it was Science Café Night at Wexford; as it is every Third Tuesday of the month. Our presenter at SciCaffWx works for the local County Council as their Environmental Officer. He's the bloke who makes sure that the earth can probably take the discharge of the septic tank [prev] before the CoCo grants planning permission for a one-off mansion with 'garage' the size of a laborer's cottage.  He talked with authority about the EU Water Framework Directive back in 2015. Ireland is gradually, reluctantly acknowledging that we can't keep throwing any old shite in the rivers and seas. There are too many of us now and our effluent is way more than half a kilo of poo each day. All those conveniences - food, transport, stuff, plastic - and the by-products of their manufacture needs to be disposed of somehow, somewhere.

But this week it was clear that Brendan's brief was broader than the quality of water. He has lately turned to air-quality and in this he is way ahead of the national Environmental Protection Agency or other bodies which have an interest in monitoring what we breathe. First off he defined some terms: PM10 is particulate matter with a diameter of about 10μm; PM2.5 is a quarter of that and PM1 is 1 micron across. The instruments which measure the stuff are so calibrated to give readings for these three classes of micro-matter. The WHO guidelines are that there should be no more than 50μg/m3 in the air. Hmmmm, actually there is no safe level of black sooty particulates in the air we breathe, but WHO has set 50μg as an attainable exceedance value.

In 1992, I forced my attentions upon met one of the Greats of 20thC biology John Maynard Smith at a conference dinner. Apart from Life the Universe and Everything, we talked about the appalling quality of the Winter air in Dublin, where Maynard Smith's daughter was working at the time. He asserted that people in Dublin would throw pretty much aNNything on the grate if it had some calorific content: old inner tubes, sneakers, twigs, broken pallets, milk-cartons. The consequence was a pall of bilious smoke roiling about in the canyons of the terraced streets <coff> <coff>.  It was true, I cycled through it every night on my way home from work. That same year Mary Harney, the Minister of Health, declared Dublin a smoke-free zone, which meant that it became illegal to sell bituminous coal within the city. Peat was exempt for political expediency because it was exclusively produced by the semi-state Bord na Mona - the Turf Board. Nevertheless peat briquettes were/are quite desperate as regards particulates whatever claims they might have on patriotic duty.  The trouble with smokeless coal is that it burned at a much higher temperature [hence smokeless, lads] than aNNy-old-shite and so was rumoured to burn through a normal cast-iron fire grate in short order.

That smokey coal ban was eventually rolled out to other cities and towns across the land . . . but not on to the countryside where political expediency maintains that there is no air pollution. In a small town like Wexford it is only 5 minutes in the car to the nearest creamery that sells Polish [high particulate] coal. I don't think there has been a single prosecution for burning the wrong coal in the wrong place - it's a) unenforceable and b) politically dangerous because the rich don't burn coal they have oil- or gas-fired central heating but the poor are allowed to vote. Despite the leakiness of the legislation, there has been a definite improvement of air quality when you take the trouble to measure it (as they do in Wexford CoCo): 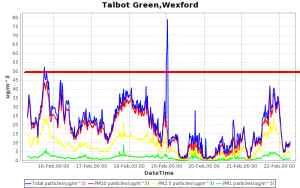 That is a seven day snapshot of particulates captured from the air this week in the middle of Wexford town [pop 20,000]. There is a single spike at tea-time on the 19th Feb 2017 where the value is 60% higher than WHO guidelines say it should be [the red horizontal line]. It also shows that the PM1 values are not really contributing to the load but bumbling along the bottom of the graph. That is a Good Thing because these smaller particles penetrate deeper into the lungs and actually cross the alveolar epithelium and enter the blood. The PM10s otoh tend to stick to the nasal and esophageal epithelium and get swept up and out by the action of the cilia. otoh-otoh, by sticking to the esophagus and being rich in complex aromatic chemicals they give a bit of a leg-up to esophageal cancer.  In New Ross [pop 10,000], contrariwise, a town with no smokeless zone, the spikes are much higher and more frequent: 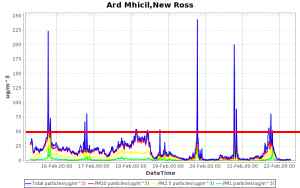 It looks like pretty much every evening there is a huge spike of black matter into the air in preparation to the gathering of the family after a day or school and work. It can't be good and there is a sense that the government might one of these years bite the bullet and roll out the bituminous coal ban across the whole Republic. Air pollution kills! WHO data suggests that particulates in the air are the cause of 1/8 of deaths globally. Strokes, ischaemic heart disease, cancer, acute respiratory infections and chronic obstructive pulmonary diseases are all linked to excess particulate matter in the air. We've been talking about open fires and what gets burned in them. There's a whole other story about internal combustion engines; particularly diesels idling away in a traffic jam. Two images to hold in your mind:
How's your inhaler? At SciCaffWex, we all got so excited by the data [see above in colour] which is being generated live about particulates that we started to speculate about how it might be matched with adverse health effects. Asthma is so common now that every third person has an inhaler - although most of them don't know how to use it effectively. I wondered if there might be an App [everyone has a smart-phone now] which would pick up the sqrtttt sound of a puffer and send that with GPS coordinates to a central register, picking up the nearest particulate count data on the way. Apparently not: keeping the phone alert for the sound would be a mighty drain on the battery. Other cleverer ideas were tabled among the beer mats. It works, the Science Café.
Posted by BobTheScientist at 07:01