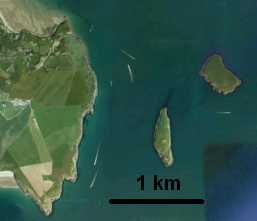 The WEA [Western European Archipelago] is what I choose to call the British Isles because a large chunk of the second biggest island is Not British.  For nearly 80 years the Republic of Ireland has been able to dispense with the Saxe-Coburg und Gotha Windsor family as heads of state, and yet spend as much time ogling Royal Weddings and idolising Princes as everyone else on the islands. Like any geographical feature, the WEA is fractal: no matter what scale you consider there is little groups of islands; islets; reefs; rocks; boulders; rocks; pebbles; sandgrains. Let us zoom in [R] to a pair of tiny islands off the coast of Wales. They are tucked in under the heel of the Lleyn Llŷn peninsula in North Wales, very close to Abersoch, whose sandy beach you can see in the NW corner of the Sat-pic. Everyone speaks Welsh in Abersoch except the hoards of visitors who come for the beach, jet-skis [the white streaks in the picture], wind- and wave-surfing and regular dinghy sailing.

The islands were known in the past as the Studwalls but that's a clear corruption of St Tudwal's and in Welsh they are called Ynys Tudwal Fawr [W] and Ynys Tudwal Fach [E]. Each is about 10 ha. in extent and privately owned. The one nearer the coast was bought by Bear "Everestless" Grylls, celebrity outdoorsy hard chaw, in 2001 - a snip at £95,000.  It's not freehold but the 70 years remaining on the lease should see him out.  They should see his kids out too if <scandal> he continues to leave them out on isolated rocks in a rising tide. He is strong believer in the "better drowned than duffers, if not duffers won't drown" school of raising children.  It was all pre-arranged with the RNLI whose lifeboat was called out to 'rescue' Grylls Jnr. Head Office RNLI affected to be aghast when it was revealed that <frisson> a child had been endangered.  They had to temper their aghastity because another stunt of Lt Cmdr Grylls - jet-skiing round the biggest chunk of the WEA - had raised loadsa money for the RNLI.

Up until 31 May, Ynys Tudwal Fach was owned by Roma Barrack aka Carla Lane, who died on the last day of May in the fullness of her years. She was famous for creating and writing a number of iconic TV sitcoms that wrought humour from the edges of life.  In 1991, she bought Tudwal E as a wildlife sanctuary.  The previous year she had created Animal Line trust with her vegetarian pals Rita Tushingham and Linda McCartney to be nice to animals. The St Tudwal's are, for example, one of the few places in the densely populated WEA where harbour seals Phoca vitulina [seal prev] can haul out on a beach without being annoyed, or shot at, by people.  Some vegetarians can be priggishly self-righteous in their dietary preferences [not Ms Barrack, of course de mortuis nil nisi bonum].  She was given a gong - OBE - by the Brits in 1989 for services to writing but returned it in 2002 when PM Tony Blair trumped her OBE with a CBE [higher] award to the director of an animal testing laboratory. You can follow up on the war between the lab HLS and PETA [People for the Ethical Treatment of Animals] on your own time.

Rats and mice have been on St Tudwal's for at least 500 years, but Lt Col Grylls has eradicated the rats - what price wildlife presentation?  Five years ago, someone decided that Carla Lane was a legitimate target for a wind-up and installed a huge McDonald's Golden Arches on the roof of her medieval chapel / hermitage. What price private property?

More blessed isles on The Blob.
Posted by BobTheScientist at 07:28