Earlier in the week, I was visiting palomino Rene in St Mullins at the very start of the River Barrow Navigation. We've been there before. St Mullins is desperately romantic with a medieval motte-and-bailey on the village green, an holy well, a little medieval chapel and one of the earliest examples of hydro-power in Ireland. As we visited, the tide came in and the rocks in the broad reach of river threw off a hunting heron Ardea cinerea as the water covered them.  St Mullins is 30km from the sea but still tidal.  I expressed amazement about how the town of New Ross which is still 15 river-winding km from the sea grew to be a port at all at all. Why didn't ships just unload their cargoes at some convenient place on the coast and quickly turn around for more? Rene glanced at me pityingly and asked "And just how would people have transported those goods to their homes in the interior?" Red face, me and point taken.  On the way home from that visit, Young Bolivar and I were discussing how, even 100 years ago, labour was cheap but transport was expensive and that now the equation is neatly reversed. This has consequences on how things are built: 100, or even 50, years ago, houses hereabout were built as rubble-in-courses from the local granite rocks.  It takes time to patch together a 3-D jig-saw of random stone into a 500mm thick wall with two vertical faces. Nowadays, you can, for half nothing, get bales of "4 inch solid" concrete blocks delivered to your door and build walls faster, straighter and possibly stronger.

All that made me think about bulk transport in the days before motorways, so I was primed when a piece about the Stecknitzkanal popped up in Wikipedia. The canal was for a few hundred years an important part of the Alte Salzstraße which brought salt from the interior of Germany near Lüneburg to the great Hanseatic port of Lübeck on the Ostsee / Baltic coast. The trade in white gold served many aspects of food production but was vital for the preservation of herring Clupea harengus which in turn was vital for normal life in Catholic Europe when Fridays were deemed to be meat-free. Before the Stecknitzkanal was built to connect the North Sea, Hamburg and the Elbe with the Trave, Lübeck and the Baltic, the salt had to be carted over the intervening distance. Transport through the sandy heathlands was bad enough in High Summer but became frustratingly difficult when the road 'surface' dissolved into sludge in Winter.

In 1390 the merchants of Lübeck agreed to go halfsies with Erich IV Herzog von Saxe-Lauenburg to build a canal across the ridge between their two territories and make them both rich by taxing the traffic. The first shipment of salt - 30 barges containing 5-10 tonnes each - arrived in Lubeck in 1398. The trade peaked the following century at 30,000 tonnes/year but declined steadily thereafter.  And it wasn't only salt that used the canal: lots of bulk non-perishable cargo made the journey in the reverse direction: herring for starters, but also furs, timber and grain. Peat, coal, and bulk building materials like bricks, gravel and limestone were later added to the taxable traffic. 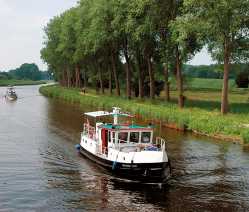 The length of the journey was considerably more than the crow-fly distance because the two navigable rivers didn't quite flow in the 'right' direction and were quite wiggly. Indeed, only 12 of the 97 km of the route were in a totally new channel.  The summit was only 17m above sea-level and a key element of the navigation was to install weirs to hold back the water into long horizontal reaches along which horses could tow the barges. These reaches were initially linked by 'flash-locks' incorporated into the weirs which were opened when a barge had to go through and closed as quickly as possible before all the stocked water rushed away down-stream.  This was fantastically inefficient and wasteful of water and was the cause of perennial dispute between bank-side millers who needed the water high to serve their mill-race. Eventually the flash-locks were replaced with single chamber locks which were technologically more sophisticated and much more conservative with the water. By the end of the 19thC, the 8m wide trench of the Stecknitzkanal had been replaced /upgraded to the mighty Elbe-Lübeck canal [R above] which is still used for commerce and leisure.
Posted by BobTheScientist at 06:23