After I wrote my piece to camera about the Brexit Follies, I dropped into the Post Office in Leighlinbridge [a village: bloboprev]. I go there for stamps because the two post offices in Carlow, where I work, always  have lines out the door with people cashing their welfare cheques. I'm middle class, I have a car. I can leave work a little early and buy stamps on my way home. I don't need a welfare cheque.  The PO in Leighlinbridge doubles as a TV repair shop and the post-master is under-employed because the dispossessed can't afford to live in a pretty riverside village. When he's not serving the odd tourist "5 stamps for postcards to Canada, please", he's watching the banks of televisions and so is very well informed about news, the soaps, cooking and antiques. Hearing my accent [it happens all the time], he asked me for my opinion about Brexit. I told him. He reassured me that it would all be alright because The Markets had had rebounded that day, the day before the referendum.  Metaphorically tapping his nose, he said that financial traders and economists knew what was really going on.

As the world knows, the postmaster in Leighlinbridge and all those optimistic finance whizzes were wrong. Ireland [in]famously has a weather-predicting postman from Donegal called Michael Gallagher. On slow news days, editors will send someone up to ask his opinion on snow next Christmas. He even has his own website; so lazy-arsed editors can just scrape the column-filling opinion without the expense of a round trip to Glenfin. I'm not alone being annoyed at this: sometimes Mr Gallagher is right, sometimes he's wrong; sometimes you roll a six, sometimes you don't. There's another wrong postman in Leighlinbridge.  It also indicates that economists have no better way of predicting the future than Madame Silverpalm and her horoscopes. Actually, economists do have some algorithms for the effects of mass action on goods & services and supply & demand. What annoys me is that commentators will give a reason for events in their post hoc analysis: "profit taking" "market jitters" "fears about the Chinese economy" which have the ring of truthiness.  Nobody lost money by underestimating the intelligence of people during referendums. 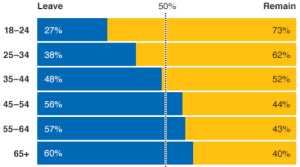 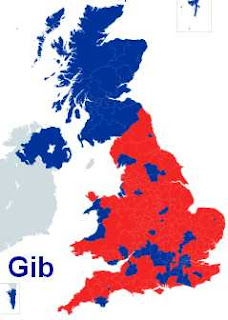 One fall-out of the debacle is that the British Prime Minister has fallen on his sword. Resigning is an occupational disease in British politics; in Ireland Pols just tough it out when found in bed with their secretary or to have been culpably negligent in the execution of their duties. Cameron's cunning plan to give a sop to the right wing of his party by making the referendum a plank of his re-election platform has gone spectacularly awry. As the vote-by-age graph [above] shows, younger people have been deprived of their rights to travel to another EU country to look for work by their parents who have a nice job thank you. The age stratification was the same in the Scottish referendum two years ago and in the Marriage Equality gig here last year. My generation has dicked about with the housing supply for ideological and self-interested reasons in such a way as to deprive our children of affordable places to live.

Another obvious inequality is the regional distribution of Innies and Outies. Having been bullied and bamboozled by the full weight of the British [= English] establishment to remain in the UK in 2014, the Scots have now been sledged out of the EU by those same self-interested, backward-looking delusionists. I think we can expect a re-run of the Scots Independence Referendum before Clause 50 of the EU Lisbon Treaty [about leaving the party] is fully implemented. The Brexiteers have escaped from the 'tyranny of Brussels' only to lose all their grouse-moors.  The other thing to note is the occasional island of blue in England and Wales: that's where the universities are located. Educated people see that, on balance, the European Union is A Good Thing: good for the dispossessed, good for justice, good for trade, good for inclusion. The Brexit camp was driven by ignorance “I think people in this country have had enough of experts.” [Michael Gove Conservative MP] “There is only one expert that matters and that’s you, the voter.” [Labour MP Gisela Stuart] There is an worrying undertone of racism dressed up as patriotism in the rhetoric of the Leavers.  If the Donegal postman were to predict pogroms at Christmas, it would at least be credible.