We haven't had a really big volcanic eruption this century, so you might think we're due one. In my lifetime we've had Pinatubo in the Philippines in 1991 which was 10x bigger than when Mount St Helen's in Washington state USA blew its top in 1980.  The death toll was about 10x in the more recent eruption as well.  But both of these Herculean ruptures of the Earth's crust are knocked into a cocked hat by the 6-8th June 1912 emergence of a new geographical feature in the arm-pit of the Alaskan Peninsula.

They named it the Novarupta dome and for many years after the events of 1912, everyone believed that the principal source of the ejecta was Mt Kitmai about 10km East of the dome.  You can see [L in centre] how relatively unexciting the dome is compared to the surrounding mountains but this is just the plug on a truly massive eruption. When geologists came to investigate the bang a few years later, they noticed that Kitmai had acquired a huge central caldera and assumed that this was the pipe through which the magma and matter had passed on its way to the fresh air. More recent careful investigative work on the tuff and tephra that remains on the ground has made it clear that the caldera was created when the supporting underburden had been sucked out towards Novarupta and the central part of Kitmai collapsed into the void [illustrative cartoon]. Altogether the 3 day wonder blurfed 30cu.km of matter into the atmosphere and along the ground. This is 3x the volume of Pinatubo and 30x bigger than Mount St Helens. Which makes it sound like like a giant among volcanoes. 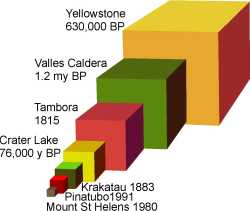 But there are bigger! Novarupta was about the same size as Krakatoa East of Java down in the bottom left of the infographic [R]. Notice that the largest eruptions are a long time ago, but that doesn't mean that something similar couldn't happen in our lifetime. When the 1912 eruption occurred in Alaska it was even more sparsely populated than today. The largest state in the US is home to less than 700,000 people giving each one 2sq.km to roam in.  The eruption was preceded by a series of earthquakes that induced almost all the people living in the area to go stay for a few days with Auntie Flo in Anchorage, so that number of fatalities was far less than teeny-tiny Mt St Helens 68 years later. You have to know when to shift your duff in the face of impending disaster.  Otherwise you might finish up like Harry Truman, an 83 y.o. innkeeper at the foot of Mt St Helens who was much interviewed in the run-up to the 1980 eruption. He was always good for a salt-of-the-earth soundbyte for the camera crews "If the mountain goes, I'm going with it. This area is heavily timbered, Spirit Lake is in between me and the mountain, and the mountain is a mile away, the mountain ain't gonna hurt me boy."  He was entire misinformed about the power of trees to stop a moving wall of lava, becoming literally the salt of the earth when his lodge was vaporised by a pyroclastic flow which covered the site 50m deep.
Posted by BobTheScientist at 06:27