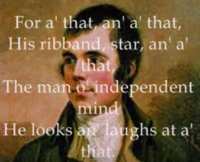 Tonight ye maun celebrate Burrrrns Night in some fashion.  Even if it's only a tot of Scotch whisky.  In Великий Новгород Novgorod-the-Great and {Львів Львов Lwów Lemberg Lviv} it may be difficult to locate a safe source of haggis; kielbasa колбаса won't do - no oats Avena sativa. But I'm sure you can get a bottle of Scotch, even if it's called Sochi Genuine Old Kilt. Burn's Night celebrates the Bard's Birth on 25th Jan 1759.  He was dead before the century was out at 37 of rheumatic fever aka Staphylococcus (tsk tsk me! see correction in comments) Streptococcus infection, which would have been trivial to treat if he'd been born 200 years later. I have facetiously called him Rabbi Burns in the title because he knew a lot . . . of women: he fathered at least 10 children on 4 different women in ten years of active bonking. His picture [appropriately on the Left] is here superimposed with one of his most famous lyrics A Man’s a Man for A’ That. Which you may hear being sung in fine harmony.  Unless you're born Anglophone, you'll probably need the words to follow the Scots dialect.  The jury is out on whether Lallans / Scots is a language in its own right. yet you can still enjoy Tintin in Scots. Burns was just reaching adulthood in 1776 when the American colonies declared for local and democratic so the Rights of Man were in the air and Burns was able to give these sentiments voice. I've had his Parcel o' Rogues on The Blob before: a scathing indictment of the corruption of money and politics.  We should be awake to that: in Ireland, we are due a general election before St Patrick's Day this year.

There's loads more.  Burns penned more than 500 songs and poems and they weren't all political and social rantin':

Posted by BobTheScientist at 07:04