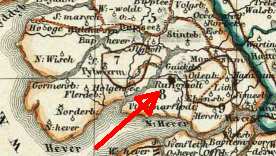 We've had some floods in Ireland this last December and we've been heroic and despairing and stoic and bitter and wet about it. But however bad it's been, we have to acknowledge that it's been worse in other times and other places. 16th January <today> 1362 in the North Sea, for starters. That was the date of a storm surge drive by a huge SouthWesterly gale sweeping in from the wide Atlantic known as the Grote MannDrenke or the Saint Marcellus' Flood.  The most notable loss was the city of Rungholt in the North Frisian Islands in the Duchy of Schleswig.  Rungholt was a community of 2000 people, prosperous from trade and industry, and the whole place was sucked into the sea that terrible day. 2000 sounds like a village in 'today's money' but on medieval scales it is substantial. For centuries afterwards, fishermen would bring up relics from the drowned land. These relics may stop development of a huge new off-shore wind-farm in the area, as Vattenfall is ring-fenced <metaphor!> as an archaeological site following discoveries.

Actually, 1362 is known as the Second Saint Marcellus' Flood because a similar event, from similar causes had devastated NorthWest European coasts on 16th January 1219.  Across the sea the Grote MannDrenke was the nail in the coffin of the prosperous city of Dunwich, which in its heyday rivalled London as the principal port of Eastern England.  It was progressively eroded to a hamlet by floods and storm surges in 1286, twice in 1287, 1347 and finally in 1362.  The map [R above] shows the city of Rungholt in the middle of the island of Nortstrandt.  The island itself survived for a while longer, but is now very wet all the time. It makes you think about impermanence.
Posted by BobTheScientist at 06:57