Space is, as the name implies, empty but it is also vast and when [almost] empty is multiplied by vast: 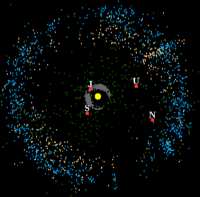 the result is a helluva lot of of stuff out there, albeit rather dilute. A year ago, I was concentrating on the local debris left by a generation of space exploration. Today I'm further from home out near the Kuiper Belt [R with Jupiter, Saturn, Uranus and Neptune identified with initials near pink blobs]. On The Blob, it's becoming traditional to give Mike "Prince of the Minor Planets" Brown a trib in January each year [2014] [2015].  I like his style although he his career has not been without controversy: largely in priority spats about who saw what first.  His demotion of Pluto from status as the ninth planet to one of several Trans-Neptune Objects TNOs, at least some of which are bigger than Pluto, is no longer controversial. Pluto is only a planet in aged books of pub-quiz questions. Brown is in the news again this last week because he's changed his mind! Changing your mind in science is just as rare as it is in other fields: changing your mind requires yielding to persuasion or data or evidence - and not many people are happy to make the mental and emotional effort.

We are now being asked to believe that squitty little Pluto and Sedna and Makemake and Huamea are being brought into line by the Mother of all TNOs: a huge lump of a planet perhaps bigger that Neptune itself. You can name squitty little minor planets after obscure Polynesian deities to show how down you are with minority peoples, but so far everyone is zipping their gobs and calling the big one Planet Nine (hypothesis) . . . except Brown and his co-worker Константи́н Юрьевич Батыгин Konstantin Batygin who refer to their hypothetical planet as Fatty. That's the level of respect in which major discoveries are held at CalTech: previous CalTech names include Easterbunny, Santa and Xena the Warrior Princess.  Here's the evidence from a CalTech press release: 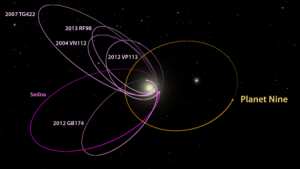 The thing to abstract from the picture is that Planet Nine [Yellow orbit R] is pushing its gravitational weight about in such a way as to entrain several small TNOs into highly eccentric orbits pushed out on the other side of the sun. They are also 30o out of true with the main planetary disc of the Solar System. These six planetoids with most distorted orbits were cherry-picked from a computer model which included 92 TNOs which were set in motion by Rodney Gomes, an astronomer from Brazil, in 2012.  He suggested either a nearby Mars-size cause or a more distant Neptune-sized planet.  That idea was taken up by another consortium of astronomers which included a former collaborator of Brown's called Chad Trujillo; they also suggested a large object as an explanation for distorted orbits in the far distant, freezing cold outer limits of the solar system.

Brown and Batygin thought this was was a load of bollix most unlikely and set up their own computer simulation to come up with a more reasonable explanation. Now they are rowing in behind the new normal to vote for a large and very distant ice giant about 5000x the size of Pluto; 10x the mass of Earth and 20x further from the sun than Neptune. Their calculations say that the current alignment of the six off-centred planettes [hey, new coinage! please 'like' it on Friendface-astroblogs] is highly unlikely to have arisen by chance (P < 0.00007) and so must have been laid in place by mean-motion resonance with the hypothetical planet. I haven't seen the probability calculations but they will have to have taken into account the 92 - 6 = 86 normal-shaped orbits of the other TNOs in the original Brazilian model.  By Brown's account, stomping along the corridor at CalTech to thrash out the hypothesis, the model, the simulation and the evidence with Batygin was "perhaps the most fun year of working on a problem in the solar system that I've ever had."  I like that a lot; having fun while doing great science is one of the best advertisements for the field.  It sounds like the collaboration enjoyed by Cédric Villani and Clément Mouhot although they were separated by the Atlantic at the time.

Now the hunt is on to find Fatty with a telescope. The mathematics predicts its location with a certain amount of fuzziness so it's not a random search in the vast emptiness.  Actually, with the persistent occurrence of pre-covery in this field, it is possible that a telescopic photograph has already 'seen' the planet and has it stored in an on-line archive. Planet Nine might well be revealed by a 15 year-old night-owl from Иркутск Irkutsk with a computer. Look out! Or look to your screens.
Posted by BobTheScientist at 06:36