When Dau.I and Dau.II were caught in foreign by the eruption of Eyjafjallajökull in 2010 we all had to learn how to pronounce at least one Icelandic word. Time for another - Vestmannaeyjar. The West-man Islands are an archipelago of 15 diminutive volcanic islands stretched out from the South coast of Iceland.  They are situated right on top, and are part, of the mid-Atlantic ridge MAR.

In November 1963 a new member appeared from the sea preceded by a huge cloud of steam and smoke. It was named Surtsey after Surtr, a Norse fire-giant, and its birth was well exciting for 9 y.o. me even on a crappy black&white TV. Three weeks after it emerged from the waves, three journalists from Paris-Match landed to claim the island for France but they legged it 15 minutes later, when Surtr gave another dramatic belch. The volcanic action continued until June 1967 at which time the island was about 270 ha in extent.  Since then, Winter storms have taken their toll and about half of the island has been washed away. It was obviously very interesting for geologists and vulcanologists to witness and record the development of a brand-new piece of ground. It was also a great project for several groups of ecologists as they recorded the invasion of land by a succession of plants and animals as soon as the place had cooled down.  Because they can, botanists calculated that 75% of the invasive plants arrived in bird-shit, compared to 16% by wind dispersal and 9% washed up by the waves. The island is a UNESCO heritage site and care is taken to minimise the impact of humans on this natural ecosystem. "An improperly handled human defecation resulted in a tomato plant taking root . . ." makes you (well me, aNNyway) wonder what might be a properly handled human defecation might be. On a human scale, the midwifing of Surtsey seems violent in the extreme. We can't imagine the magnitude of the event(s) which brought 100,000x larger Iceland up from the deeps. 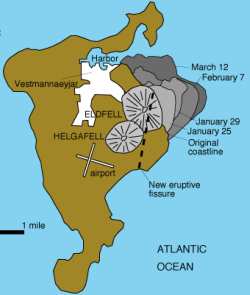 On 23rd January 1973, Heimaey, the only inhabited [N = 4500] member of the Vestmannaeyjar unzipped itself rather dramatically along a line starting about 1km in extent and rapidly doubling in length [L dotted line]. The torn earth sent out a large quantity of hot lava and ash which was uncomfortably close to the small fishing town next to the harbour. Within 24 hours pretty much the whole population was evacuated by plane and trawler to the Icelandic mainland. A skeleton crew of emergency services and fit volunteers remained behind to observe events.  But they were not mere passive watchers; when the lava started to flow directly towards the fishing harbour, on which the entire economy of the island depended, someone had the idea of pumping cold sea water (sea water is always cold round Iceland) onto the advancing edge. An estimated 6 million tonnes of water was enough to cool and slow the advance sufficiently that the still flowing molten rock found an easier way to travel: away from the port. That's what's protestants do, they don't sit on a mat bewailing the will of god, they roll up their sleeves and act . . . sometimes it makes a difference. For those experiencing the trials of Storm Jonas a weekend of snow-and-blizzards along the Eastern seaboard of the USA and think it's Armageddon, imagine having a restless earth event eating the edge of your town for 6 months. The eruption didn't stop until July, by which time Heimaey had become 220 ha larger [grey on map L above]. More room for Puffins Fratercula arctica, of which there are apparently 8 million, to breed!

More islands, including several on the MAR.