The sea can be rough - very rough.  And sailors can tell tall tales - very tall tales. It would be interesting to bring science or at least real solid objective evidence, for some of the extremes of weather experienced at sea or at the edge of the sea.  At Christmastime last year, I wrote about the mysterious disappearance of all three lighthouse-keepers from Flannan Isle, which was the subject of a poem and much speculation.  I suggested that they had been taken up to a new life interplanetary sex, but it seems more likely that they were swept out to sea by a freak wave and died despite following standard operating procedures. And it must have been a helluva a wave to wipe out Henry Winstanley and his [second] Eddystone Lighthouse in 1703. Neither of these events left any eye-witnesses let alone iPhone footage.  That's the problem: waves far out of the ordinary are no-survivors sort of events.  How far is out of the ordinary, given the natural variability of all natural phenomena? A Rogue Wave is defined as being more than 2x the height of Hs or SWH [significant wave height], which in turn is the average of the highest 1/3rd of waves in a recorded wave-train. These are the highest waves we have on record and this wave is twice the size, that's what a Rogue Wave is. 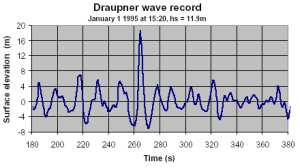 Then on the afternoon of 1st Jan 1995, exactly 21 years ago, the first Rogue Wave was recorded directly with down-pointing laser sensor instrumentation set up on the Draupner Oil Platform about 190km of the coast of Norway.  At the time the SWH was a frightening enough 12m (twice the size of our two-storey house) but the wave itself [seen above at 265s] was 25.4m high! You can see that it is not the extreme tail of any normal bell-shaped distribution but rather an entity from a different place in physics.  The physics also says that a large [12m, say] wave might deliver a punch equivalent to 6MT/m2 6 million tonnes to the sq.m.  The mother of all Rogue Waves might whack you with 100 MT/m2; as water is more or less uncompressible and inelastic, this can be felt like a slab of concrete hitting the side of a ship and whisking off anything that is sticking out and/or not battened down.

There is a plan to visit the new grandchild in England in a few days time: I shall be wearing a life-jacket and two pairs of long woollen underwear . . . and a hard-hat.
Posted by BobTheScientist at 08:43