A tuthree weeks ago, I reported on a pushing-the-frontiers experiment which I carried out with my first year cell biologists.  They were tasked to see if there was any truth in the assertion that the height to your navel and the height to the top of your head are measurements in the Golden Ratio 1 : 1.618. We concluded that it was sort of true, if you ignored the variation in the sample and stuck to the average and were not pedantically fussy about how close to 1.618... the ratio should be: is 2% error okay.  On a rather small sample, I also noted that the variation about the mean didn't look bell-shaped or 'normal' but was distinctly skewed.  With a larger sample (see R for histogram) it's getting to look a bit more symmetrical but it still looks flatter than it "should" be.  That's probably okay and next year when I've doubled the number of participants [send your measurements on a postcard to . . .] we'll be getting some analysable data.

As it happens, this Golden Mean investigation came about almost by accident as an add-on to the real experiment which I devised for these sporty students.  I asked them to determine their reaction time by seeing how quickly they could catch a 30cm rule dropped by a confederate: the distance and hence the time being easily recorded in cm or mm.  If the rule falls further, it's because your reaction time is slower. <pedantry alert: nobody was dropping a 30cm ruler because the king of Lilliput was otherwise engaged that week>.  It being science I required that this experiment be carried out a number of times to get a handle on how reproducible the findings were and I also got them to measure reaction times with the left and right hands. There was plenty of scope for hypothesis testing: 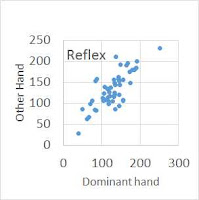 Well the results are in.  No difference between boys and girls and no difference between left and right.You can see this last from the graph: about half the dots are below the L=R line and half above it. I don't think the sample is big enough or the measurement precise enough to determine if arm length makes a difference. That's because there is a lot of variability among replicates.  But even with that noise there is a rather good correlation when you compare left-speed with right-speed [R: r = 0.77; r^2 = 0.59] among people.  That's because there is a rather large range in reflex speed (here measured in mm of drop; you may convert that to a time in milliseconds using the appropriate formula and knowing the acceleration due to gravity is 9.81m/s^2) among people - the fastest being about 3x quicker than the slowest.  Now the eugenicists among you will want to know how well this reaction time compares to end-of-year grades in Cell Biology. Is there such a thing as being quick on the uptake? And the sportistas among you will be making bets on whether a sofa-slob like me is slower off the mark catching falling objects than the county champ at 100m dash.
Posted by BobTheScientist at 07:02