Pipettes - the graduated tubes for measuring precise quantities of liquid - are used every day in The Institute.  Back in my day they were glass and washed, dried and probably sterilised in an autoclave at the end of each days work.  Every science department employed at least one person as "bottle-washer" to provide this infra-structural support.  Nowadays, the pipettes are mostly plastic, used once and then thrown away.  They are sterilised, probably by gamma-irradiation, certainly off-site and come in a little paper wrapper that creates yet more trash for landfill. Wot are we like?  The generation before me were able to blow their own glassware, just like the lads in Waterford Crystal . . . nothing like that of course but making droppers from glass-tubes, or little flasks for mixing their potions: that was part of the training.  I have a dim memory of me making capillary tubes in the 1970s by heating a fat glass tube in a bunsen burner and drawing it out to a thin fragile tube of much smaller diameter. We were the last, like we were the last to use a slide-rule to multiply two big numbers.

Someone had to invent the graduated pipette and there is some agreement about it being a French chemist called Joseph Louis Gay-Lussac whose birthday it is today.  He was born Joseph Louis Gay in 1778 at Saint-Léonard-de-Noblat in the Limousin of central France, the son of a successful avocat / lawyer.  The family adopted the Lussac suffix to indicate that they owned most of a village north of Limoges called Lussac-les-Églises.  It looks solid and rather Irish: here's the main square and the pharmacy. They were definitely part of the establishment and the father was arrested and spent a year in jail during the Terror because of this. I guess they weren't pushing the extra name until things settled down under Napoleon.  The revolution was not only about whacking the aristocrats it was creating a brave new world, Gay fils benefitted from the establishment of a series of Grandes Écoles to educate the intellectual elite of the new nation.  He enrolled in the École Polytechnique in 1798, four years after its foundation by Gaspard Monge and before it became a strictly military institution under Napoleon in 1804. He later transferred to the engineering school École Nationale des Ponts et Chaussées or ENPC where he soon became assistant to the chemist Claude Louis Berthollet. Another of his mentors was Pierre-Simon de Laplace [previously]. Laplace? Monge? Berthollet? These are enormous names in their fields and Gay-Lussac knew them all. Stressful as it was to live through the social revolution, it must have been wonderful to take part in the chemical revolution that was running in parallel and much of it in France.If you have the patience to read the 20 volumes of Master and Commander Aubrey/Maturin series of Patrick O'Brian, you'll get a feel for the ferment and the internationalism of science in those heady days.

Gay-Lussac is most famous for sorting out one of the fundamental laws of physical chemistry that gases combine in simple ratios w.r.t. their volume regardless of their molecular weight. He noted for example that:
2 vols of Hydrogen + 1 vol of Oxygen = 2 vols of gaseous water
if you substitute molecules or moles for vols it becomes clearer why this should be so.  We've met this principle before in the making of ammonia from hydrogen and nitrogen during the Haber-Bosch [If you want to call it the Haber-BooHiss process, I'm behind you]. One of the many fundamental implications of this is that all gases occupy the same volume. . . because the lumps are infinitely small compared to the space surrounding them. 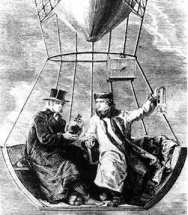 But that was only one of his achievements. The pipette is another, the burette (a pipette with a tap in the bottom) is another. Well he didn't invent the burette, but he improved it and was the first to use that name. Here [L] he is with his friend and collaborator M. Biot [previously] going seven kilometers into the air under a hydrogen balloon to measure the temperature and moisture content up there. With his pal Humboldt [previously] he wanted to see if the gases of the atmosphere are in the same proportion (although much less dense) as they are at sea-level. They are.  He discovered two elements boron and iodine and worked out the chemical formula for prussic acid / HCN / cyanide.
He married Geneviève-Marie-Joseph Rojot a girl he met in a draper's shop, whom he noticed reading a chemistry text-book under the counter. A marriage made in chemical heaven and at least one of the children went on to achieve fame in science. Chapeau bas!
Posted by BobTheScientist at 09:49