I suspect that you are damned ignorant about US Civil War generals, even if you're American  . . . even if you come from Virginia. Accordingly I've cobbled together a quiz and a survey. 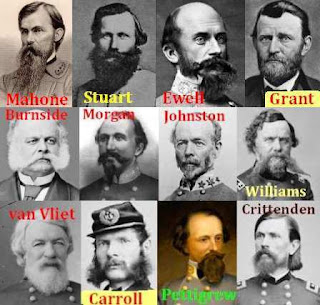 1) Which of the following fought for the Confederacy and which for the Union [in which I really asking the question: which side paid more attention to grooming?]
William Mahone; JEB Stuart; Richard Ewell; Ulysses S Grant

Ambrose Burnside; John Hunt Morgan; Joseph E Johnston; Alpheus Williams
Stewart van Vliet; Samuel Sprigs Carroll; J Johnston Pettigrew; Thomas Leonidas Crittenden
2) Which one has the most extravagant facial hair? Gereral Burnside's rolling white wave was so distinctively noticeable as to give English the word 'sideburns'.
Notes:
There, TMI on the general front. I hope they come up in a Pub Quiz before you forget who had a wooden horse called Potomac.