13th December is/was Saint Lucy's Day, the Festival of Light, celebrated as Lussinatta in Sweden since they were Vikings.  Because of the cock-up in the calendar, 13/Dec coincided with the Solstice, so folk  needed some magic to help the rebirth of the sun and that has involved a lot of candles over the years.  In Sweden the eldest daughter of the house has to dress in a white shift and put on a head-dress with flaming candles before she wakes the rest of the family with coffee and saffron buns.  Sounds like a dodgy idea to me: it's really difficult to get candle-wax out of the sheets for starters. Swedish cultural imperialism, or the desire of neighbouring people's for an excuse to party, has spread the celebration of St Lucia to other Scandinavian countries.  That's all I have to say about the day because I missed it this year.  I'll try to be more with-it in 2016.

For further St Lucy tribs, you may like to listen to Andrea Bocelli singing Santa Lucia Neapolitan style.  You're on your own with that, though, for some baggage-y reason that song really creeps me out. 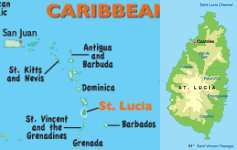 Having dealt with candles and song [tick, done that] allows us to ship on out to the parliamentary democracy of Saint Lucia in the Caribbean. They are independent now, but still part of the Commonwealth and still have Mrs Windsor as their head of state. But the island was a shuttle-cock between France and England for 400 years from its discovery by Europeans in the 1500s. The first white-folks to have some sort of settlement were a pirate-crew led by François "Jambe-de-bois" le Clerc. Subsequent invasions were seen off by a deadly mix of tropical disease and warlike Caribs.  St Lucia is still part of La Francophonie despite being finally assigned to Britain by the Treaty of Paris in 1814. This results in the peculiar situation that the official language is English but 95% of the people speak French or Patwa, the local French-like creole. It is clearly French but some ancestral Lucian couldn't trill their Rs: agwéyab = pleasant; nom fam gason ti fi [un homme, femme, garçon, fille] = man woman boy girl; Piti hach ka bat gwo bwa = Little axes cut big trees. The legal system is still based on the Quebec Civil Code of 1866.

Although the primary export [22% of earnings] is bananas, the economy is more centred on offshore banking and tourism; St Lucia is a frequent stop for cruise liners and tourists also fly in for the beaches and the food: cassava and yams; chicken and goat; green figs and saltfish; rice and peas; often with a generous sprinkling of scotch-bonnet chillis. St Lucia is no desert island, but close to being a tropical paradise where its 600 sq.km are shared by 180,000 people. The natives seem to be happy. What Barbadian-Canadians think about them. ". . . they very jokey-jokey, they like a lot of bacchanal . . ."

Other islands.
Posted by BobTheScientist at 07:49