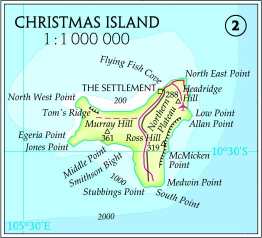 A ship, the Royal Mary, of the East India Company, Captain Wm Mynors, sailed past an island [R] on Christmas Day 1643. They clocked it at 10o30S 105o30E about 500km S of the Sunda Strait between Sumatra and Java. Captain Mynors named the island for the day that was in it and sailed on into the oblivion of history. No European set foot ashore until 45 years later when two sailors from English explorer Wm Dampier's Cygnet landed at Dales on the West coast. Dampier was the chap who rescued Alexander Selkirk in another place and another time.  Christmas Island is not a million miles from the Cocos (Keeling) Islands of which we treated and the two territories have had an intertwined history. They are currently under the administration of Australia as part of the Australian Indian Ocean Territories. 200 years after Dampier's expedition, Captain P Aldrich, RN of HMS Egeria landed the Cambridge naturalist JJ Lister to collect animals, vegetables and minerals. The main finding was rich seams of calcium phosphate Ca2P2O7 which was recognised as a potentially valuable agricultural fertiliser and led the the island being annexed by the British. Extraction was commenced by the Phosphate Mining and Shipping Company using slaves indentured servants from Singapore and Malaysia.  Phosphate has been the cup which keeps on giving and it still contributes about 90% of the export earnings for the island.

If you think that Europe, Lampedusa, Malta and Kos have a collective problem with emigrants, reflect on Christmas Island which now has more refugees than regular citizens; indeed there are about 3x as many refugees as there are designated spaces, so it must be a bit like an Irish A&E department on any Winter's day.  Reflect that the nearest launching place for an attempted Ozmigration is 400+ km distant, which is about 4x further than Africa to Lampedusa.  If everyone knows that a much longer journey is required to reach Western Australia, then only the most desperate will attempt it. In any case, the Australian government have legislated to prevent landfall on the island being treated as equivalent to landfall on the Australian mainland.  The precipitating political crisis goes back to 2001, when the Norwegian container-ship MV Tampa picked up 400+ Afghanis from a leaking shalloop in the middle of the Ocean and attempted to land them at the nearest civilised country - Christmas Island. ABC coverage. They were refused entry. Currently the policy is to ship landed refugees to Nauru in the middle of nowhere rather than taking them all into the bosom of the Australian family.

The other migration for which Christmas Island is famous is that of the red land-crabs Gecarcoidea natalis which are endemic to Christmas Is and Cocos.  These hefty [10cm across] crustaceans live in the rain forest but once a year set off for the beach where they have a lot of crabby sex so that the eggs hatch into a particular high tide. The larvae are swept out to sea where they develop and dodge predators for 3 weeks before returning to the same beach like salmon to their natal river. Natal? Note the crab's specific name natalis: of Christmas. There are millions of the crabs living in damp parts of the forest: their numbers may have shot up in comparatively recent times since the extinction of the local rat Rattus macleari 100 years ago.  The homeostatic control of population numbers depends on complex interactions among species; as we saw with wolves and moose on Isle Royale.; and also wolves, beavers, willows and rivers in Yellowstone. The role of scythes-man of crabs has recently been taken up by Anoplolepis gracilipes the 'yellow crazy ant', an invasive alien which has appeared on the scene in many tropical and subtropical islands. Nobody knows where A. gracilipes hails from so it's impossible to locate a natural predator to keep the micro-monster in check. If your species of interest is bigger than a breadbox and the predator isn't a microbe, you have a chance of saving the situation by human intervention: as we saw with penguins and foxes off the coast of Victoria. You're at nothing with that sort of solution for the ants.

What makes biological science so interesting is how interconnected it all is.  The reduction in numbers of the land-crabs has changed the balance of plant life in the forest because the omnivorous crabs used to eat seeds and seedlings. In contrast, the ants have a commensal relationship with some species of Hemipteran scale insects and their population increase can have a detrimental effect on the growth and development of forest trees. It will all settle down eventually but the settlement may require the extinction of some of the players before a new equilibrium is established. Try not to think of Anoplolepis gracilipes savaging land-crabs to death as you dismember your Christmas turkey.
Posted by BobTheScientist at 07:18