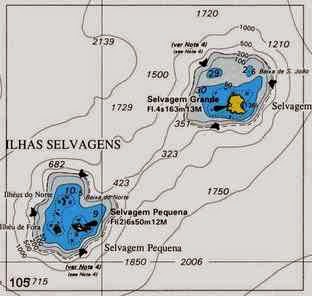 It's archipelago time, folks.  There are so many minority interest island groups that need to be given parity of esteem with the WEA in which all my near relatives live.  Just because they have fewer inhabitants (N=2) and at 273 hectares about the same area as a biggish farm, doesn't mean to say that we can ignore As Ilhas Selvagens, the Savage Isles, that lie out into the Atlantic about halfway between Madeira and the Canary Islands.  Some great maps and pictures and informative text if you can hobble along in Portuguese. As both these resort centres are now in the Euro-zone and as most of the tourists don't bother to learn a word of either Portuguese or Spanish when they go for a melanoma-and-chips vacation, you might be forgiven for thinking that these two archipelagos are "essentially the same".  You might accordingly wonder at why anyone should care about who owns the wee scraps of land that lie between them which are only visited by the most ardent and enthusiastic birders and have nowhere to buy sunscreen or chips.  They are actually a little closer to the Canaries (165km) than to Madeira (280km) but they were assigned to the diminished Portuguese Atlantic Empire through which I spent some time travelling in the 1980s. The quango that made this decision in 1938, known as The Permanent Commission of International Maritime Law, did so at an awkward time for Spain which was too busy with its Civil War to send a deputation to the PCIML to dispute ownership. In any case they had no real dispute about who should own the islands just so long as whoever did would build a lighthouse on Selvagem Grande, after a number of ships bound from Europe to Gran Canaria or Tenerife piled up on the islets and reefs of the Savages instead.  Neither country seemed to have either the spare cash or the political will to sort out this hazard to shipping.  In 1971, Portugal purchased the islands out of private ownership and declared the whole area to be a National park and Conservation Area. In the late 1990s Spain inexplicably started throwing shapes by over-flying the archipelago with fighter jets but it was all piss-and-wind and they stopped when told firmly that such boy-racer antics were disturbing the nesting birds.  There some geological hints that oil and/or natural gas might be available in the region; if that pans out Spain will be much more interested in volunteering to maintain the lighthouse, which did finally get built.

Talking of boy-racers with slightly more testosterone than sense brings to mind Francisco Lufinha who, last December, took it into his head to kite-surf from Ilhas Selvagem to Madeira in one swell foop.  It took him 12 hours of having his arms jerked out of their sockets to achieve this record.  I presume he was shadowed by a support craft with SatNav, spare Hi-Viz life-jacket jacket, and plenty of Kendall Mint Cake and Lucozade, nevertheless he's created a rather exclusive club.  The previous year he had kite-surfed from Porto in N mainland Portugal to Lagos in the Algarve.  This took him 28 hours with no stops. To put that into some perspective, I walked from Sagres [30km West of Lagos] to Porto and a little beyond in the Fall of 1989. It took me about 5 weeks.

Now here's an etymological conundrum.  Time was people went skiing in the Alps and elsewhere, with two separate planks strapped one for each foot.  Then someone thought it would be nifty to go downhill on a single, slightly wider plank - they called it snow-boarding.  Somewhere along the way somebody decided to go skiing behind a speedboat - that was water-skiing.  If you meld the two developments and get dragged round a lake on a single plank you would surely call it water-boarding (oops, no that word has been pre-empted by the black ops of the Western powers protecting the planet for democracy), so they call it wake-boarding.  If you're totally bonkers you can try this with a very fast boat and a board with a subsurface hydrofoil - this has to be seen to be believed.
Posted by BobTheScientist at 07:17