A few years ago, I was teaching here at The Institute, part-time for 2/18th of a salary.  As I already had a job that scraped me into the top income tax bracket, most of the money I earned was clawed back by the government in tax.  Given that I had a round-trip of 80km to work, after the petrol had been top-sliced, there wasn't much to show for my efforts to spread the word about bioinformatics and molecular evolution.  At the end of the year, I asked the students how it had been for them, so that I might improve the content and delivery for those who came after.  After some hum&haw, a couple of them piped up and said
"Could you not use such long words?"
"Well, my good students", I replied, "some technical terms are unavoidable in any advanced scientific course, can you give me an example of a word that you found alienating?"
"Salient!".
I was at a loss, part of my mind was racing on to say bluffly that of course they knew that salient, as an adjective, means prominent or important; why, did they not remember the Ypres Salient from their studies of WWI?  But the better part of my brain was shouting "Stop! you've said enough already", and I shut my gob in time. It was a salutary reminder that not everyone has had the doubtful benefits of a very expensive education.

There's a very interesting salient in the middle of Africa on the borrrder between Egypt and Sudan. You may remember, one rainy Sunday afternoon on the TV, seeing Charlton "Gun-nut" Heston playing General "Chinese" Gordon across the desert from Laurence Olivier playing the Mahdi in the 1966 Action/Adventure movie Khartoum.  Gordon died defying the odds in January 1885 and the British abandoned Sudan to an Islamic State for 15 years until the Battle of Omdurman in late 1898. Winston Churchill, future PM of the country next door, 'earned his spurs' with the charge of the 21st Lancers which was almost toooo Kipling altogether.  That event, and the subsequent 'mopping-up' of the local people, put the British i/c the Sudan which they administered jointly as Anglo-Egyptian Sudan.  The following year, the administrative border between Egypt and its Southern dependency was set at 22oN just North of Wadi-Halfa, a way station on the Nile between Khartoum and Cairo: heck-and-all, it had to go somewhere and as it was all effectively part of the same country it didn't make much difference. 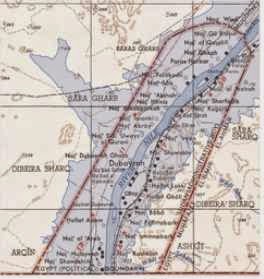 In 1902, this arbitrary slash across the continent was modified taking into account the local conditions.  For example, the clatter of little communities on the shores of the River Nile immediately downstream from Wadi Halfa were easier to lump in with that slightly more substantial metropolis and rail-head.  This 25km x 10km thumb is known as the Wadi-Halfa Salient. It doesn't really matter who is in charge there now because almost all of the area was submerged in the 1960s after the completion of the Aswan dam.  In the map [L], the Lake Nasser inundation is coloured blue/grey.  The Anglo-Egyptian condominium was a bit of a charade as Egypt itself was part of the British Empire and became more and more untenable after the Brits withdrew from Egypt in 1936 but were loath to leave Sudan to its own devices. When King Farouk was overthrown in a republican coup in 1953, the new Egyptian government renounced their sovereignty over AES as a finesse to force the British out.  And it was so: in 1956, Sudan became an independent nation and the border became a significant issue between the neighbouring countries.

The frontier problem lay in the two other jinks in the 22nd parallel dotted out on a map in Cairo to accommodate the realities of who grazed which part of the desert at those points in 1902. The smaller area to the South of 22oN is called Bir Tawil after a local well.  The more substantive region with sea frontage is usually called the Hala'ib Triangle after the coastal town that it includes.  It looks small enough on the page but, at 20,000sq.km, is about as big as, say, Vermont, Wales or Crimea.  Bir Tawil is barely 1/10th the size. Now diplomacy is largely about throwing shapes and posturing and  the minute parsing of long past treaties and accords.  A lot of nonsense about precedence and honour, precedents and hauteur, and back home for tea and medals.  It is in Sudan's interest to accept as binding the pragmatic re-jigging of 1902 and it is, contrariwise, the Egyptian position that of course the 1899 decision based on the 22nd parallel is clearly correct.  It gives them a bigger slice of pie on the Red Sea.  But in order to lay claim to the sea-frontage you have, in the pedantic logic of diplomacy, to deny any claim to Bir Tawil, which accordingly becomes terra nullius and owned by nobody.

Enter Jeremiah Heaton, a farmer from Abingdon, Virginia who last year travelled to the area with a home-made flag [R] and claimed it as the sovereign Kingdom of North Sudan.  It seems that this was all to fulfill a promise made to his 5 year old daughter that Daddy will make you a Princess.  A country needs more than a flag, a monarch and an heir apparent, so Heaton launched a national crowd-funding site yesterday and has already raised $1,000 of the estimated $250m required to fill the pirate chests in the inflatable castle. Princess Emily definitely needs a couple of tiaras and some sparkly shoes. All good fun and mostly harmless.