Be prepared, that's the boy scouts' marching song. History is written by the victors. This sentiment is usually attributed to Winston Churchill (a victor) but is probably neither unique or earliest to him. George Orwell definitely wrote a variant in his As I Please column in February 1943, while reflecting on propaganda in the Spanish Civil War and WWII both of which he lived through. Humans have a very strong drive to re-write their own story so that they come out looking a little better, a little more correct, than they actually were.  If you have done something reprehensible, you can usually shift the blame [in your own head at least] onto some external source to which you were merely responding. I was only obeying orders has become a cliché, and not only in the Nuremburg Trials.

Insofar as nations exist, and we are responsible for the sins of our fathers, then it was hollow laughable for the Brits and the Americans and their allies to take the high moral ground on weapons and mass destruction WMDs in the run up to their adventures in the Middle East this century.  I've recently mentioned the evidence that the Allies were shipping Mustard Gas to the front lines during WWII "in case".

I'm currently updating and re-writing the Food & Fermentation Microbiology protocols into a formal manual, so that it can be cited by the students when they write the 'background' to their experiments rather than transcribed from a legible type-face into biro-with-added-typo. Over the weekend I was working through the aerobic spore-formers - mostly Bacillus spp. - and putting in a few named example microbes of which the students might have heard and/or which cause some problem that is of obvious importance.  These include those poxy Chlamydia, Neisseria and Treponema and also Bacillus anthracis [CDC info] for example, which caused an additional frisson of fear in the USA in September 2001 when spores of this species were send through the US mail to some journalists and politicians.  After several years of intense investigation, one of the prime suspects, Bruce E. Ivins, committed suicide and the FBI abruptly closed down their investigation as "solved".  Not everyone agrees.

Spore-forming bacteria have been shaped by evolution and an uncertain world. When nutrients run out or the environment gets mortal hot, a collection of genes are triggered, the genetic material is concentrated in a heat- and dessication-resistant spore and the cell shuts down virtually all its metabolic activity. When the outside seems more favorable to life, another set of genes switch everything on again, the spore breaks out, absorbs water and the reconstituted bacteria is back in business, metabolising and dividing.  The spores are typically resistant to very severe chemical, physical and biological assault - that's how evolution has designed them.  It is therefore very difficult to kill bacterial spores, so you want to be careful where you put them.

In 1942 at the lowest ebb of British fortunes in WWII, a cunning plan was conceived to infect German cattle with anthrax: no more cattle, no more beef, no more butter, no more cheese.  As anthrax will infect humans as readily as bovines there was hope that the attack would result in no more Germans.  It was a plan and plans need an operational budget, a logistics protocol and a feasibility study. The project was put in the care of bacteriologist working in Porton Down, called Paul Fildes. Porton Down is the British bio-warfare [now, in Orwellian double-speak, called chemical, biological, radiological and nuclear defence (CBRN)] establishment. He ordered up 5 million x 30g linseed oil cakes which were processed from the raw material by a London soap-manufacturer.  A vat of Bacillus anthracis was grown up, concentrated and aliquoted into the cakes which were then packed up into handy-sized cardboard boxes.  They were scheduled to be dropped out of the bomb-bays of airplanes returning from yet another raid on Berlin; the fields of Hamburg and Lower Saxony being particularly targetted.

In parallel the project commandeered Gruinard Island just off the Scottish coast about 10km West of Ullapool as a suitable testing ground.  In the nature of a controlled experiment, they crated up some sheep and exploded a bomb filled with anthrax spores just upwind.  Three days later, the sheep displayed symptoms of infection and most of them died coughing up blood. So far, so successful . . . except for the sheep. The problem came when they thought about cleaning up after their investigation. Anthrax can be contracted through skin-contact - it's common enough to have been given a name: woolsorter's disease - as well as through the lung epithelium or by ingestion. 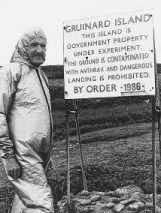 As I said above, spores are forever. The solution to the problem was to put some chaps in HazMat suits and put a big sign [L] pointing seawards at all the likely landing spots.  Not beating about the bush, they announced that "The ground is contaminated with anthrax and dangerous".  Lucky the rates of literacy are so high in the Highlands and Islands of Scotland. The place was off-limits and effectively forgotten for nearly 50 years.  In the 1980s there were a couple of instances of "Gruinard soil contaminated with anthrax" being sent anonymously to the Conservative Party conference and other establishment addresses. It was clear that there was a hostage to fortune off the Scottish coast so The Man finally decided to clean up.  A contract for £500,000 was put out to tender, 280 tonnes of formaldehyde was delivered to site, diluted with 2,000 tons of sea water and sprayed over the entire surface of the island.  It is reported that some contaminated soil was removed in 55 gallon [208 lt] drums from the island: presumably this was from the site of the original release of the spores. A few years later, anthrax could no longer be detected on the island, a flock of sheep was released and remained indefinitely asymptomatic.  The Government therefore declared the island safe for man and beast and sold it back to the original owners for £500: the price they paid for it in WWII.

Not everyone is so chipper and upbeat about the end of a sorry cycle of environmental contamination.  Dr Brian Moffat, the chief archaeologist excavating the site of a medieval monastic hospital near Edinburgh has found anthrax and tetanus spores in the middens of the infirmary . . . which has not been in use for hundreds of years. On the other hand, you can get hysterical and over-reactive over a few anthrax spores. Bacillus anthracis exists in many natural habitats including woolsorter's hands and their innate immune system keeps this potential deadly pathogen under control.  In the same way, 30% of us have MRSA up our noses with not a bother on us. It's only the very old, the very young, people on immunosuppressive therapy after a transplant, or with AIDS or having undergone as hip-replacement who contract MRSA and are therefor like to die. Anthrax is a little more concerning, but no more than Ebola.

Finally a bit of number-crunching.  Assuming that formaldehyde is still lethal to anthrax spores [and all the natural flora of the soil as well] when diluted 280:2000 in sea water, what is the application rate? Gruinard is close to 200 hectares in area which is 2 million sq.m. and 2000 tons is 2 million litres. A milk carton-full of dilute formaldehyde per sq.m. doesn't seem like an awful lot.  It would have been silly to spread the stuff uniformly across the island.  I'd really like to see the precise instructions in the clean-up protocol.
Posted by BobTheScientist at 05:56