Democracy? I think not 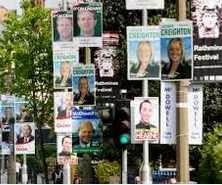 In Ireland we live in a democracy.  This means that, every few years we go to polling stations and vote for our political representatives.  The politicians want to get elected and the custom has built up that candidates attach election posters to telephone poles and lamp-posts to raise their profile in the consciousness of the electorate.  The standard posters are printed on a sheet of corrugated plastic about 900x1200mm and are often shockingly inept - unintentionally humorous hair-style, fat tum bursting out of shirt, vacuous expression, apparent aura or halo, illiterate slogan.  More 'happening' candidates have recently taken to airbrushing the wrinkles and photoshopping the jowls to such an extent that they are unrecognisable on the doorstep.  The posters are an eyesore for a month before the election but are really useful about our farm afterwards, making compost bins, covering wood-piles.  I do try not to put the politician's face next to the dung - I'm not totally insensitive: even about Fianna Fail.  There is a limit to this allowable littering of the street-scape: nobody may put up a poster within 50m of a polling station.  Likewise, you may not in person encourage people to towards your political beliefs anywhere near the polling station. Nobody wants to run a gauntlet of hectoring party apparatchiks on the way to vote. And of course you cannot carry a poster or a flag into the polling station itself. 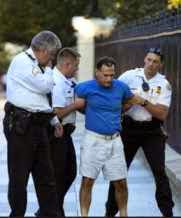 This time round, however, we are being warned by the [independent] Referendum Commission that you shouldn't go to vote wearing your position on your sleeve as a rainbow scarf or as a Nil button on your lapel. Furthermore, we are being forbidden to take selfies in the polling booth - the legislation clearly needs to catch up with the social media deluge in which we are now drowning. Posters in the polling-station are one [undesirable] thing but stripping off my Tá button?  Where will it stop?  Will they take my Fáinne?  As it happens, Carlow-Kilkenny is going through a bye-election at the same time as the referendums.  Apparently, outside the Carlow County Courthouse this morning, a security swat-team from the Referendum Commission over-stepped their brief on keeping Yes and No buttons off lapels and arrested a man who turned up to vote in a blue shirt.


Irony warning: this post is intended as satire.
Posted by BobTheScientist at 13:39