The Blob came to life in January 2013, almost buried memories were stirred up by wholly novel experiences starting a new job in a different sector of the Irish education system. That's how the mind works - it's stratified.  Availability error, a universal of human thought, means that I'm often writing about what is uppermost in my 'mind' rather than writing about what is a) important b) interesting to anybody else.  In general, for all of us, if it happened 5 hours ago, it's more likely to engage our brains than if it happened 5 years ago.  There are exceptions to this rule-of-thumb as when I went to visit my 107 year old granny in 2001.  She had been living at home with her son, who was also well into his pension years, until she had a stroke during the night after her 107th birthday after which living at home was no longer sustainable.  While chatting to her, she couldn't remember my name or really who I was five minutes after I'd told her [again] but she could describe in detail the house she'd lived in 100 years before. When thinking about writing something for The Blob, this stratification will get stirred up and something long forgotten will bob to the surface and down it goes on the page.

Stratification is a key element of the physics and chemistry of water: with weird exceptions down near freezing point, warmer water is less dense than cool and floats to the top, where it is heated by the sun whose radiance makes the water a little lighter, a little more floaty.  Meanwhile in the depths there is nothing to heat this denser, darker water except the occasional hydrothermal vent where things will be locally very hot indeed.  This affects everything else, the vertebrate and invertebrate life will be locked into a particular stratum, the oxygen levels will equilibrate and everything will settle down. In the Autumn it is usual for two things to happen a) the sun shines less because the days get shorter and because there is more cloud-cover and b) the wind gets up and start to ruffle the surface and this turbulence can get transmitted downwards until the water body can achieve a quite radical turn-over bringing the deeper, oxygen-richer [lower temperature and higher pressure allow more gas to dissolve] water up from the bottom.  This turn-over can be extremely dramatic as in the case of Lake Nyos, where a catastrophic de-stratification killed 1800 people. 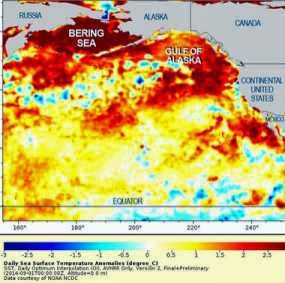 More or less over the same time period as The Blob has been exploding myths and investigating science in Ireland another far larger Blob has been developing off the Pacific Coast of North America. It was first noticed in August 2013 when it crossed a threshold in an infra-red detector aboard a NOAA satellite [R for recently] and was beamed back to Earth as a substantial temperature anomaly off the coast of British Columbia and the Alaska panhandle. When detected it was 800km in diameter and 100m deep that's about 4 trillion tonnes of sea-water that is 2-3oC hotter than it should be at that time of year in those latitudes. Those who are equipped to explain what's driving this are not able to to come to a consensus as to the causes, but all agree that it is called The Blob after the coinage of Nicholas Bond in Summer 2014.  It is possible that the phenomenon was started by a persistent ridge of high-pressure over the region in late 2013 - that often means fair weather and no turnover.  The Blob is now much bigger and it is spawning: there are now three separate regions of warmer water from Mexico all the way round to the Russian side of the Bering Sea.

One element of the connectedness of everything which is counter-intuitive is that warmer water typically supports a smaller biomass than cold, probably due to the bottom line that everything ultimately depends on oxygen and, as I said above, cold water will dissolve more of this key element.  Low oxygen = low photo-synthesis thus fewer herbivores; fewer carnivores; fewer whales and seals and dolphins . . . then we sit up and take notice. As one meaty straw in the wind, they've found skipjack tuna (Katsuwonus pelamis) 300+km further North, off Alaska, than they've ever been seen before.  Some climatologists think that The Blob presages a much needed spill of rain in California, while others, equally well qualified, think the opposite will happen.

If this all reminds you of El Niño, the much more widely known warm part of the ocean temperature cycle in the Southern Pacific, it is not surprising because the basic symptoms are the same.  The Butterfly Effect is the concept that a small flutter in one part of the world has the potential to tweak the inherently unstable system that we call 'weather' in quite unpredictable ways. They claim that the last brutal winter (2009/2010) we had in Ireland and across much of Northern Europe was associated with or even driven by El Niño half a world away.  Global warming is now agreed to be a misnomer because it's not all a steady conversion of the globe to a tropical paradise.  It's about record breaking of all sorts: coldest, hottest, driest, wettest, windiest often happening at the same time in different parts of the world. We live in interesting times.

But the bottom line is that, if I start to get above myself, just remind me that The Blob (the wet one on the other side of the planet) is 10,000x bigger than all the people that on earth do dwell.
Posted by BobTheScientist at 06:36