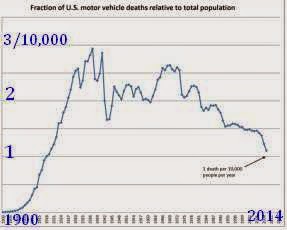 John and Alicia Nash are dead. just two out of the 30,000+ people who will be killed in road traffic accidents this year in the USA.  The rate of RTA fatalities [worldwide] is going down both in absolute terms and more so in relative terms as the number of people and vehicles on the roads is steadily climbing along with their carbon emissions. It is about 3x safer on the roads now than in 1940 [R].  The cops in New Jersey were quick to report that neither Nash was wearing a seat-belt and so they were flung from the taxi in which they were returning home from the Airport along the New Jersey Turnpike.  I've advocated that these things should be made public pour encourager les autres with regard to safe behaviour in and about vehicles.  Still it's better to neglect your seat-belt than to be txtn yr pals while at the wheel. The obits show that the film streamlined the Nashes' life a bit by ignoring the fact that Alicia divorced John in 1963 when the madness all got too much and she remarried him 38 years later. For me the point is that John Nash was supported and tolerated by his wife and their Princeton community for a helluva long time because he was a once-and-future genius. That tolerance of The Different could be much more widely expressed. Indeed we should celebrate, cherish and nurture difference because same-old same-old is not going to get our planet out of the nice mess humanity has gotten it into.

Where had the Nashes been?  They'd been to Norway to pick up a half share of the NOK7,000,000 [€750,000ish] Abel Prize which recognizes outstanding scientific work in the field of mathematics. The citation for 2015 talks about their contribution to partial differential equations, of which the easy explanation by Alex Bellos won't be either easy or interesting unless you have a degree or two in mathematics.  We met John and Alicia before on The Blob in a review of A Beautiful Mind the film of the book by Sylvia Nasar. I then had some important things to say about letting the mad alone. If you start the meds, or the Electro-convulsive therapy [alternative positive view], let alone some gung-ho brain surgery, then you are likely to be committed to more and more of the same until the well runs dry or you run out of money.  Nash believed that he thought himself well as his endocrine equilibrium changed with age. “I emerged from irrational thinking, ultimately, without medicine other than the natural hormonal changes of aging,”  Very few of us would have the patience to let things hang for 3 decades until they [maybe] got better.  And we have a very low tolerance threshold for people talking to themselves in public.  I think this is a recent phenomenon as medicine has taken on a supermed mantle that everything can be cured: even things that should be let alone.  In the run up to the Marriage Equality Referendum there has been some retrospective about how homosexuality was 'treated' when it was considered to be an illness a short generation ago. Alan Turing anyone? They still talk about the Turing Test as a lynch-pin of our understanding of Artificial Intelligence. We talk less about Turing's Testes which were rendered 'confused' by judicial injections of artificial estrogen.  Aaaargh, retrospective rage!  Further back in time, today is the anniversary (28 May 1936) of Turing submitting for publication his ideas on the Turing Machine.  This was a key gedankenexperiment / thought-experiment in the maturation of computer science: on the back of a few envelopes Turing laid out how all computers would work. iPhone anyone?

In the run-up to the Referendum, a bright child asked his teacher,"Miss, after we free the gays, who will we help next?".  Let's rephrase that: After we let homosexuals just get on with what seems right and appropriate to them, let's look at doing the same for a rattle of mental illnesses: ADHD for starters.  There may be a condition or a syndrome called ADHD but I know that it is massively over-diagnosed among children who are just not happy sitting quietly waiting for instructions in school - possibly because that is so boring and unchallenging. There are people alive today who were physcially and psychologically abused for being left-handed. It is far too easy to tsk tsk about the past - it is harder but necessary now to look sharply at our unconsidered certainties about where normal ends. Back in the Hippy 1970s R.D. Laing maintained "Insanity - a perfectly rational adjustment to an insane world" and "Schizophrenia cannot be understood without understanding despair." He campaigned against the over-drugging of the 'mad'. It was difficult to hear him shouting that crisp labelling of conditions led to too much money was being diverted to Big Pharma. It was easier to dismiss him as a Marxist; then his 1983 confession in a broadcast interview that he and his parents had had disturbing mental 'episodes' conveniently provided an excuse for him being effectively struck off the register by the British General Medical Council.  If we feel so uncomfortable about our treatment of mental illness that we never see lunatics abroad in society, then it is likely that our diagnosis and treatment of mental illness is needlessly cruel, destructively normalising, riotously expensive . . . and wrong.
Posted by BobTheScientist at 06:46