One of my first jobs as a teenager was to creosote the fence of the rather wonderfully named Walter Wheel, an elderly semi-retired farmer who lived within sight of our front door in rural Essex. Sadly no other kids lived anywhere near, so I couldn't, like Tom Sawyer, negotiate any help with the task. It took 2½ days and "ruined" 3 pairs of jeans; my mother thought it was the devil's bargain.

Several decades later, shortly after we embraced rural life with kids of our own, I went to the creamery/sawmill ans bought a dozen milled [⌀ = 75mm, L = 1.5m] fence-posts. I came away with a jug of creosote as well because "I couldn't in all conscience sell you those fence posts without giving you the means to protect them".  In due course, I slapped on some creosote, "ruined" another pair of trousers, and drove the posts into the top of a ditch to hold up a length of sheep-wire. Even with the creosote they didn't last very long. After a few years, and many fence-posts, that jug of creosote was all used up. But you could not buy creosote any more because it was deemed to be carcinogenic "But here, I can sell you this dark brown slightly viscous gloop for fence posts. It's called creocote and not the same thing at all". The evidence for whether creosote ("a category of carbonaceous preservatives formed by the distillation of various tars and pyrolysis of plant-derived material, such as wood or fossil fuel") is indeed carcinogenic is sketchy-to-weak but it surely does stain clothing - but then so does creocote.

Painting fence-posts is a messy drippy chore and for the last several years I've turned up my nose at milled softwood posts and ordered up square oak 50x50mm posts rough-sawn and hand-pointed from Jim Davis' sawmill at Graiguecullen. Jim also supplied the truly beautiful western red cedar Thuja plicata boards for Young Bolivar's woodshed. Oak posts are loaded with tannins and last pretty well without artificial preservatives. Downside is that an iron nail or staple, once hammered in, will not come out of oak.

It has been in my mind for a few years to make a post-dunker from the heavy-duty cylindrical tube that centres rolls of silage wrap. They are 2ft6in = 750mm long and get discarded in our fields every haying season. Despite sleepless nights and several years of cogitating I couldn't workout how the ideal way to seal the bottom of the tube. This year I concluded that perfick is the enemy of good-enough and sealed the bottom by inserting a tapered plastic pot, previously used for glacé cherries, and a generous squirt of silicone gutter-sealant.  That seems to work, although you will see [R] that I have the apparatus a) tied to a stout immovable pole, against upset b) set in a back-up bucket, in case of failure. 40 5ft = 1.5m oak fence-posts cost me €100 plus, say, €1 for creocote.  That's about 2x the price of peat-briquettes, yes; but I can still burn them when their utility in supporting fences is exhausted. 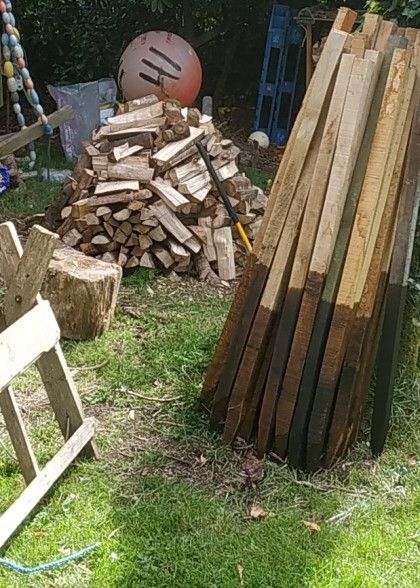 In other news - I've been down in the thinned woodland with my Zomax chain-saw and blocked all the logs from the hardwood side of the forest. I've hauled these logs up to the haggard and split them with a maul. The heap shown above is about 2/3 of the final quantity of split logs ready for chimney 2024. I'm leaving t-buggers out in the breeze while we have a hot-and-dry spell. They can be stacked neatly under the roof of the woodshed nearer winter. I wasted a good bit of time thinking about the optimum labour-efficient way of hauling the wood up-hill to the yard. But in the end stopped piffling about and loaded the stuff into the wheel-barrow [several to many times!] and pushed. Progress.