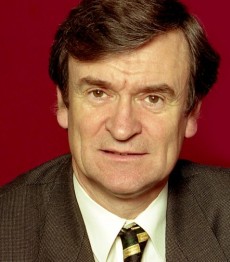 I've been audiobooking a collection of old BBC Radio 4 broadcasts from the 80s. For In the Psychiatrist's Chair Dr Anthony Clare [R eeee don't 'e look Irish?] interviewed celebs in a tell me about your mother sort of way. As the link shows, some of the episodes are still available as BBC podcasts.  Thirty years on most of those interviewees are dead and I daresay many people born this century will not have heard of {Spike Milligan, Maya Angelou, Peter Nichols, Bruce Kent, Wendy Savage, Vladimir Ashkenazy, Ken Russell, Edwina Currie, Peter Hall, Quintin Hogg, Barbara Cartland, Jean Rook} let alone know the nature of their celebrity {comedian, writer, playwright, CND activist, ob&gynist, pianist, film director, politician, theatre director, politician, writer, journalist}. So on the face of it Frankly Scarlett is a valid response to the suggestion that you listen to these interviews.

Then again, they are interesting as a snap-shot of how the certainties of even that recent past seem quaint and/or offensive now. It was normal to think of women as weak, wily and winsome by turns who would really be happier raising the children in the kitchen while the blokes swapped road directions and complaints about The Ref while watching soccer in the pub. And heck there are no gays in Co Clare! Not even Maya Angelou who has been owned a lesbian icon.

The other all time universal in these interviews is the human capacity to write ourselves a bigger role with more agency than perhaps we deserve. Case in point: Tory politician Edwina Currie grew up in an orthodox Jewish home on Merseyside. When she chose to marry a gentile, her father cut her off and never spoke to her again. Currie convinced herself that a) this didn't hurt b) she had left her Dad behind rather than vice versa. Case in point: Peter Hall famously worked 30 hours a day and yet asserted that he loved his many children and had been there for them growing up.

Whatevs! The book is available on borrowbox because, having raced through it, I returned it early.