2022 has not been as dry as 2018 but we've had the hottest day ever in Ireland - the day after we got the sheep shorn - and then the hottest day ever in our County in August which is a rather lower bar. For the garden, for those plants in the soil, I've been all survival of the fittest. I've cut plants in pots a bit of slack because it's cruel enough keeping them as pets, isolated from the wood wide web of mycelial sharing, without given them enough water. And, of course, I've had to water the tomatoes, basil, oregano, mint, parsley, sage, rosemary and thyme which are in the poly-tunnel. Under a prolonged drought, I've twice come close to exhausting the "free water" which gets gathered from the [newly refurbished] poly-tunnel gutters. About half the gutter-water gets passively siphoned inside the tunnel; the other (down-hill) half has to be pumped up. I really don't want to pump drinking water from our well for plants - especially in these water-challenged end-of-days. 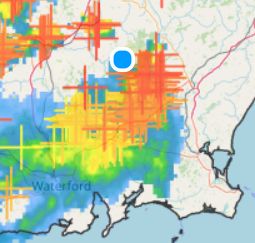 For 24 hrs - 22:00 14th- 21:00 15th August - we were promised a couple of West-moving thunder storms [+ marks the crash points] with localized spot flooding. And, as I'd used the last dribble from my 1 tonne UBC back-up reservoir, I made a point of catching some more rain before it rushes off down into the underground. And that meant being up in the tunnel, after dark, tricking about with hoses and pumps. When the rain came on cue, it was far too noisy to listen to my audio-book: it was hard enough to hear my self think. K & R pulled the plastic roof drum-tight. We had three really spectacular Bollywood monsoon down-pours but none of them lasted more than 10-15 minutes. But each of them filled my 200 lt water-butt double-quick.

Thing is that, as the rain fell, I started pumping the water out of the water-butt and up-hill to the 1 tonne reservoir . . . which was full by the end of the third deluge. The tunnel is 17m long and 9m broad, I'll assume that only half the area 75m2 catches and delivers water, via the downhill gutter, into the 200 lt water-butt. (1 cu.m. / 75 sq.m) ~= 13mm or half an inch :: that's how much rain fell in three separate, noisy, deluges totalling half-an-hour at the beginning of the week. If the annual rainfall was spread out to a continuous drizzle we'd get 3mm a day; so 13mm in 30 minutes is a drubbing. But not ultimately destructive because the ground can soak up a lot of that water before it starts off down-hill and tearing things [like our lane] up.