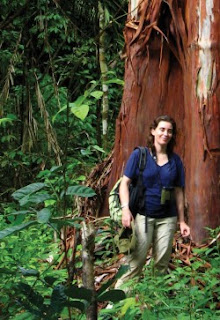 Carpe fortunam! You make your own luck if you have or can develop a sense of entitlement to succeed. My mother launched her career by earwigging on the Tube just after The war. In 1993, Kinari Webb blagged her way to Borneo to hang out with Orang-utans Pongo pygmaeus while still an undergraduate. Getting there was a journey: the last two days pushing the supply boat up-river over sand-banks getting ripped by razor-sharp lianas. The first week at the jungle research camp was the worst. After that sharing noodles and tinned cheese with cockroaches and perforce shitting in the jungle established itself as her new normal and she settled in to watch the intimate life of primates in the trees above her head. She met the tall dark and handsome love of her life out there, learned bahasa baku and heard the chain-saws in the middle distance.

In her memoir The Guardians of the Trees, Kinari shares two epiphanies. The first when she was invited to pray together for strength [to resist carnal temptation] and had a transcendent vision of her place in god's scheme of things on planet earth. Something like Ralph Hodgson's Song of Honour

I heard them both, and oh! I heard
The song of every singing bird
That sings beneath the sky,
And with the song of lark and wren
The song of mountains, moths and men
And seas and rainbows vie! 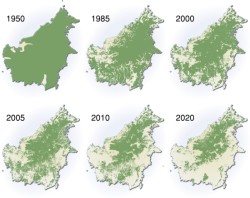 The upshot of that was that she married her bloke as soon as she graduated and determined to return to Indonesia with a medical degree and an effective NGO called Health in Harmony. Her vision for HiH is to save rain-forests, orang-utans and the other people of the forest by providing essential health care on site, rather than at the end of a three day trek through the jungle. Access of health-care is the major driver for embracing the cash economy; and there are so few sources of cash which don't despoil the environment by extracting logs or minerals. In my lifetime it was possible for orang-utans to swing across the island of Borneo from coast to coast without setting foot on the ground. They said the same thing about squirrels in the Irish forest of 400 years ago. Now the Indonesian rain-forest is reduced to scattered patches and is fast chasing Ireland to a tree-desert.

Kinari's second epiphany was infinitely more painful and damaging. Her autonomic nervous system was fritzed by a hugging encounter with a box jelly-fish while swimming in the sea on a rest day. In 2013, I wrote academically about these Chironex jelly-fish. It is frightening to hear the encounter told from a survivor. Let's emphasise, as with counting fatal car-crashes vs serious injuries, that not dying from a lashing by Chironex is not the same as being happy ever after. Dr Webb was 4 years in and out of the best US hospitals presenting a head-scratching never-seen-this-before conundrum to internists and physicians.

After the Sumatra tsunami of Stephen's Day, Kinari and her bloke flew out to Aceh, Sumatra. She was the only US doctor on the ground who was able to communicate with the natives in their native language but the ravens of disaster seemed to know better that her what was needed in the emergency. She asked the locals and found that their imperative was to clear the paddies and get the rice planted. And they could do with some help on restoring the fields. But you can't plant rice from the seat of a  4x4 and so none of the foreign aid-workers were available for the task. It's a telling take-down of NGOs and their paternalistic othering of the people whom they are supposed to be serving.

A key insight for the success of Health in Harmony and its Indonesian owned sister-NGO ASRI is that punters have to pay for their health care. Free care is disdained. Care is linked to your address and cross-referenced to the amount of logging surrounding that village. Fewer chain-saws = bigger discount. If you can't pay the cash residual, ASRI accepts payment in seedlings, manure or labour for their re-forestation ventures. Labour is fungible: sick people aren't expected to work in the forest but everyone has a nibling in their extended family who will work for love or elder-respeck or empathy.

Good, thoughtful, intermittently exciting book (11 hours on Borrowbox and other audio sources) and I recommend. Maybe skip the last chapter where she goes a bit mad-shiny-eyed on the cosmic-woo front? I don't expect anyone to go to their local bookstore and order books which The Blob reviews so here's the 20 minute TEDxecutive Summary.