Here's Marty Matchbox Makeovers using caustic soda and hot water to strip paint off a model Honda motorbike and trailer and restore it to its 1960s completeness. Marty is the epitome of Australian  laconic wit as he talks us through his endeavours: very restful, mostly harmless [PPE for NaOH!], time consuming. In another MMM video he admits to taking 10 hours on a restoration project. Yes I've watched a few, YMMV.

Part of the gig for acquiring my very expensive education was sleeping in a dormitory with a lot of other ten-year-olds. When we weren't asleep we were engaged in various noisy activities: soccer, dueling with sticks, conkers. A large hut was available for shouting and running amok if it was too miserable outside. Some of the chaps had brought treasured die-cast metal Dinky / Corgi cars to school - madness: they were bound to get trashed or used as missiles. One winter, the car-drivers found a long plank and a table and started a fad for seeing who could run their car furthest across the dusty wooden floor of the hut.

I was out of that because No Car. But I wrote to my mother explaining that because of the lack, I was losing street-cred and please pleeeease to send a car for racing. A tuthree days later [post worked back then], an Ice-cream van identical to this source, arrived in a parcel for home. On one level it was super cool <ice-cream!>: the tiny ice-cream vendor could be turned to present a microscopic Mister Whippy cornet at the end of his out-stretched arm: 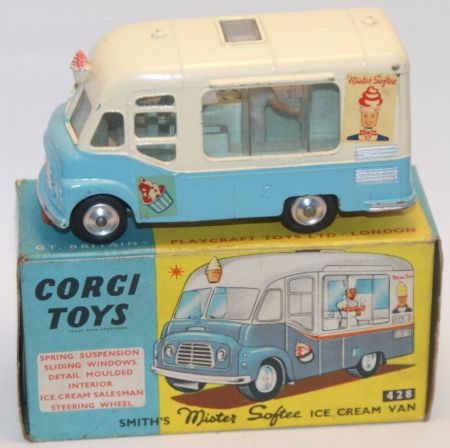 But as a contender for the furthest-across-the-floor stakes, the van was a bust. The additional weight was clearly an asset but it was super-unstable and reliably finished on its side yards from the record line . . . presumably spilling quantities of emulsified white glop all over the interior.