Continuing my vicarious insights into the pattern and process of doctoring, courtesy of Borrowbox, I've just finished 👂reading The Secret GP: What Really Goes On Inside Your Doctor's Surgery by Max Skittle [micro-taster]. There's a lot of these memoirs around at the moment; possibly riding on a wave of clapping workers in the health service . . . rather than, like, paying enough to stop these Effectives emigrating to Oz.

Max Skittle is the pseudonym of a thirty-something GP working in a 14,000 patient, multi-doctor, inner-city practice . . . somewhere in England. The Secret GP is written as the diary of a year's work at the coal-face of sick Britain. The patients who appear in this roll of anecdotes are all anonymized, as is his loving and supportive wife and their child who joins the fray three months into the saga. An infant mewling and puking in his father's arms adds new-parent anxiety and sleep-deficit to the handicaps under which Dr Max struggles. 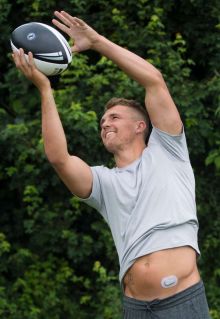 One diagnostic triumph concerns Keith - a 13 y.o. chap who is mad for the rugger but seems embarrassingly weedy for someone aspiring to be a flanker in a full-contact sport. On top of this he has presented, with his mum, because he is unaccountably tired all the time. Turns out that he also reports peeing more than usual and, on being questioned, thirsty. At least the first symptom makes it easy to produce a urine sample . . . which provides the confirmatory red stripe on the pee-stick: diabetes mellitus, type I. Diagnosis of an incurable metabolic disease may not seem like the best news for a teenager. But it's much better than some of the other illnesses which are flagged by chronic fatigue: leukaemia, rheumatoid arthritis, Epstein-Barr Virus.

Although Dr Max is, on one level, playing it for larfs - often laughing at his own gaffes and pretensions - there is a message which will be familiar to anyone who's been kept waiting for a GP appointment. The Man runs The National Health Service and can't just let primary care physicians get on with what they have been trained to do. No: The Man needs metrics so that value can be measured. Metrics soon become targets and relentlessly there is more paperwork to be done as well as helping sick people. There are no extra doctors, let alone extra money, so doctors work a lot of unpaid overtime, because they care; because they can do none other. Relaxation, lunch, sleep, family-time all all get on short time and doctors get crabbier, less empathic, less able to cure by placebo and more prone to make mistakes. We trust doctors with the lives of our mossst precioussss but don't trust them to optimise their time or make correct decisions.

Several months after his diagnosis Keith writes Dr Max a thank-you card, saying how the diagnosis led to appropriate treatment and the boy no longer feels shagged out all the time. Indeed he is back on track to become England's next fly-half but three replacing Henry "Type-I" Slade [shown R with tat and patch on his six-pack]. To the nearest whole number, in any week, any month, zero people send a card to their GP expressing gratitude for getting sorted, or listened to, or referred to experts. It's just not done. But that applies to pretty much all the people-facing employees we encounter on our daily rounds. B'god we'll light into The Help if we don't get the service to which we feel entitled. But how often do we stop and just say thanks you've made my life better than it was before we spoke.