Seven years ago, I was writing about the fractured coast of the Balkans. In a parallel universe, less obsessed with cars and speed, it would be convenient to travel from Split to Dubrovnik - both part of Croatia - on a ferry. The distance is 165 km; it takes 4½ hours by catamaran during the Summer months compared to 3¼ hours the Stena ferry takes from Dublin to Holyhead (110km). The Croatian road journey is 230 hairpin km which takes 4 hours by bus. Perhaps more important on the hassle front is that you have to leave Croatia, pootle through the Bosniak port of Neum for 6km, and then cross the border again back into Croatia: 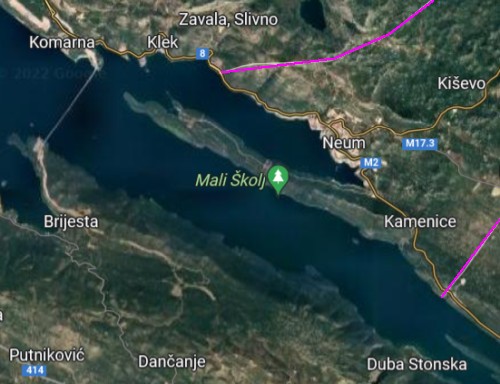 In my 2016 essay I roughed out the historical realpolitik which resulted in land-locked Bosnia getting sea access. Like a lot of these border peculiarities, it didn't matter much when Croatia and Bosnia were part of a Yugoslav federation (1918 - 1991) but potentially matters a lot after the recent round of shape-throwing and reciprocal atrocities in the early 1900s: Srebrenica for example. The Bosnian map is still a mess of demographic potage. As far as I know the Neum double border crossing is not too onerous for tourists but requires a certain amount of bureaucratic paperwork for freight. How many Bosnian Marks BAM do you have to fold into your passport to expedite the transit of your useless-if-delayed cargo of oysters?

You can imagine the political mileage in orchestrating a Neum/Bosnia by-pass to unite the Southern  fragment of Croatia (Dubrovnik: population 100,000) with the more populous (Croatia has 4 million citizens) north. Someone is delighted to announce ". . .where from 10 a.m. the bridge will be open to all citizens and visitors who want to walk on it (for safety reasons only up to the first pylon. . ." that the New Pelješac Bridge has been opened across the strait between Brijesta and Komarna. You can see all its 2.4 km as a thin white line across the sea in the NW corner of the satellite picture. The EU has funnelled €350,000,000 of you-the-tax-payer money to an engineering consortium from the People's Republic of China(?!?). I imagine that there are German vorsprung durch technik engineering consortia who are chewing their beards at not keeping such a contract within the EU family. AlJazeera claims the bridge and its access roads are open for traffic. You may care to zoom in on the 2022 map at the South end of the bridge: looks like a mess of mud and road-graders rather than, like, actual road by which users can approach the bridge. But the bridge looks fine: