In Ireland if you pay your stamps, you're entitled to an eye-check every two years and the glasses to fit if the check indicates necessity. What with the pandemic and all, I haven't been to the optican for nearly 3 years. When I was last there in 2019, I secured a pair of distance/driving glasses and pair of readers the former with "anti-glare coating" whatever that might be . . . all for €32. I professed to all frankly Scarlett about the design of the frames . . . until I was presented with the pale pink plastic option and I realised I had some residual vanity. 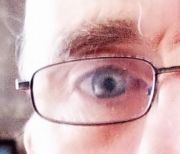 Tuesday 16th August I was down in Waterford at The Eyes Have It getting a check up. My visit was mostly driven by FOMO Fear of Missing Glasses when I need them: a spare pair would allay some of that anxiety. I R a bit limited without them: man cannot live by {washing dishes | mowing lawns | watering the tomatoes} alone. Waiting for the gaffer, I was presented with a shoe-box full of frames by a slightly tetchy opto-tech. Techy maybe because I'd declined any upselling being quite unable to detect a difference between the free government-issue frames and the several hundred €€€ frames. In short order, I chose two slightly different dark steel frames [R ½ R] - functionally identical to the frames I already hold. I'll collect and pay for them later.

In the darkened cabinet of technological marvels with the optician, I learned a couple of useful things:

Good news is that my prescription hasn't changed since 2019: I'm not as degenerate as my friends-and-relations think I am.