Walking for the Bird

Seven weeks ago, I was getting tetchy about 1,000 strangers walking straight through the middle of our property without anyone troubling to ask if it was okay. I was allowing past experience of urinating, dog-owning walkers requiring me to clean up their mess after them to colour my expectations of the ClimbWithCharlie caravanserai. Then 3 weeks ago a sign appeared down on the "main" road at the cross: 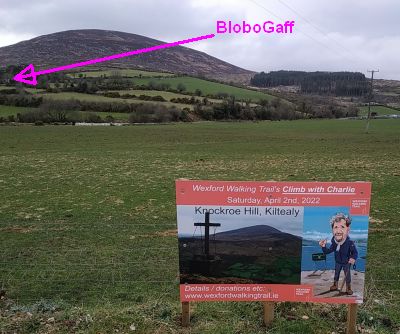 My old boss used to laugh at the pretensions of Kiltealy, the last village in Co Wexford, which has road signs directing the unwitting to it from 30km away. Tourists expecting Great Things are met with a church, 30 houses, one-and-a-half pubs and a choice of three roads out of hamlet. Now t'buggers are annexing our hill despite it being in a different county!

The walk was clearly going to happen, come rain, com shine, last Saturday the 2nd April. On Thursday, The Beloved and I snatched up a couple of feed-sacks and litter-picked the verges from our gaff to the main road. We do this most years, so it was just a question of bringing forward the spring-clean chore a few weeks . . . and beating the obscuring flush of spring-time weeds.

Friday dawned frosty but by lunch had laid on the sunshine with a gurt buttery trowel and I took a yomp up the hill to see if there were more signs of preparation for the hordes of walkers. I had just reached the mountain gate, where the lane debouches to the commonage, when a beat-up 4x4 overtook me and puffed and groaned sloowwlly up the rutted potholed excuse for a drove-road. With HiViz jackets the two lads within were clearly on some sort of scoping expedition. And indeed when I came up with their parked vehicle a while later, I spotted them in the middle distance laboring up the last stretch of impossible "road" trying to control some large plastic signs against the stiffish breeze.

They had turned and parked at the last fork on the lane where one branch heads straight for the Mt Leinster TV mast and the other curls away to zig-zag up the back of Knockroe. And Lo! The Christians have been out again and installed a not-unseemly indicator of the way to heaven [see R]. It's much safer, and possibly quicker, to reach the cross on the top of the hill by going the long way round rather than the direct crow-flies path; which is steep, covered in bushes to scratch or skirt and grikes to disappear a leg into.

On Der Tag des Aufstiegs Ascension Saturday we hunkered down and cast a cloak of invisibility over the yard between 1000 and 1600 hrs. Two Civil Defense ambulances and a truck containing 3 portaloos went up past our yard and a stream of chatter could be heard following. All in all it was really not worse than a regular Saturday in the walking season and I could find no evidence of urination once again [cue Dubliners]. Elsewhere Charlie summitted Croagh Patrick [loud cheers; even if rather too much Ryan Tubridy in front of camera!]. And €2million has been raised for Charlie's charities. Unfortunately one man took ill and died on the slopes of Mt Brandon Co Kerry.