Back at the birth of The Blob, I was bemused and tickled that a large chunk of my readership seemed to have Ukrainian IP numbers. I had some harmless fun with myself greeting them specifically and making inclusive jokes about Europe and the Viking Kingdom of Kiev. These japes were met with the deafening silence they deserved. But I did wonder if Blogger's measuring robots needed adjustment - perhaps confusing Kiev with Killarney. And that sent me down a rabbit hole of superficial "research" about this almost mythical country at the other end of Europe.

It might be time to reprise my 2013 UkrEire post which riffed on a vague shape-similarity by twinning Irish counties [N = 26] with Ukrainian Oblasts [N = 25] - ya couldn't make this up. The executive summary is this handy map for pairing the administrative districts: 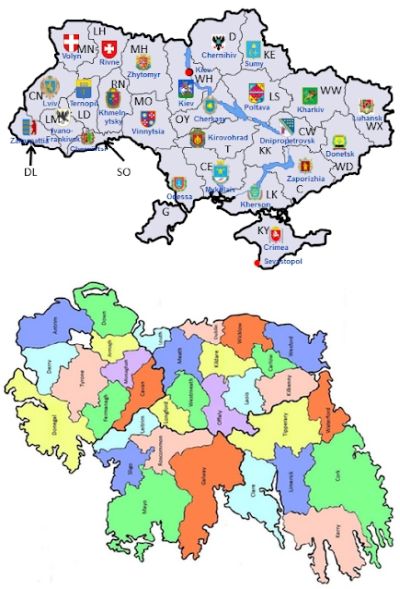 On Tuesday 05Apr I met my first Ukrainian refugee. She and her two boys are billeted on the other side of the valley: we can see their temporary home-from-home from our back garden. Her neighbour-&-landlady gave us 2 hours notice that she'd be bringing this guest of the nation to tea with us. Which was time enough to a) rustle up a batch of scones b) whip some cream c) knock off some basic Ukrainian. As you see from the post title, Ukrainian is one step more difficult than, say, Polish - because Cyrillic script. But by the time I'd gotten 12 words in Ukrainian into my noddle - and forgotten 6 of them - I twigged that it is quite close to Polish. This was brought home to me on Olga's 4-minute Ukrintro when she said я не розумію ya ne rozumiyu = I don't understand.  "Rozumiesz?" = geddit? was used as often as commas by Tadek our Polish wwooffer back in 2007. My agricultural Polish was much better than Tadek's English by the time he left. Knowing the Polish for rock kamień], spade [łopata] and oaktree [dąb] didn't help at all at all trying to buy train tickets in Warsaw when I went for the away fixture the following Summer.

As our tea-time guests came into the yard, I launched into " ласкаво просимо до Ірландії " at which one of them teared up. Quite emotional these Easterners. Indeed, Easterner is true because this family escaped from Суми = Sumy which is East of the R Dnieper (and only 50km from the border with Russia). Strictly, according to my realpolitik twinning scheme [above], coming from Суми, they should be in Kildare not Carlow but there is already a place in our hearts for them in the valley.