In 1981 An Taoiseach  Charlie Haughey launched a free lunch for The Arts Block founded Aosdána to support a small number of creative people in a modest [2021= €20,180 / year] fashion. Cynics called it out a political smokescreen to distract The People from the latest scandal unravelling around Haughey and his merrie band of fixers and finaglers. But Cnuas, the stipend, was gratefully received by the chosen few [N = 200 initially; now 250] who, more or less, became more productive because the wolf was no longer right at the door. For them garrets were yesterday. Only an indigent subset of Aosdána took up the Cnuas: Seamus Heaney was doing alright thanks, what with sales and readings and lecturing gigs - especially after he landed his Nobel Prize. I'm delirah to report that our neighbour Rachel Joynt [illustrated below, her Keepsake – Cuimhneachán] was elected to Aosdána in September last year. That brings to 5/250 the number of Aosdánites with whom I've broken bread. Everyone has heard of some of the people [list] in this exclusive group. 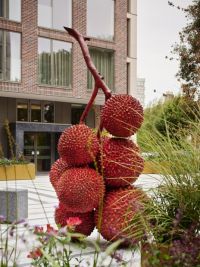 Fianna Fáil are back in [half-]power again and the current Taoiseach Micheál Martin is pushing out a pilot scheme entitled [!?!] Basic Income for the Arts. The applicant portal will be opened on 12th April 2022 TOMORROW and wannabe recipients have to get their stuff together and submitted before lunchtime of 12 May 22.

What about Best Boy, Key Grip and Boom-Operator ?? Riddle me that!

There's a few positives about the implementation.

1) It's a lottery: if you meet the basic criteria you have as much chance as the next gal to secure one of 2,000 seats at the table.  It's not as gracious as Cnuas -- €325/week = €16,900/yr compared to €20,180 -- but better than Job Seeker's Allowance . . . and you don't need to seek jobs. Aosdána elects their own; so with the best will in the world, there will be a conservative tendency to accept new members in the image of the existing crew. With a random number generator we can hope for some really Out There creatives to bring their vision to the world.

2) There's going to be [whoa! science!!] a control group who will get two weeks of hand-out €650/yr provided they fill in the same reports and evaluations as the lucky 2,000.
Q. Why would The Man need a control?
A. Because The Man is distributing €25 million through this scheme == 100 starter homes down the country. The Man, from their comfortable permanent and pensionable desk-job, must ensure that these Arts proles are delivering value for money.

The thinking must be something like: we'll measure the artistic productivity of those who are getting €16,900 and compare that to qualified but unsuccessful applicants who are only getting €650. A win will be a significant difference in output between the two groups.

Fie! and, like Pshaw! If you're doing stats you need to define your units: otherwise you're comparing oranges with an apple-pie bed. Metrology [on which The Blob has had much to say] to the rescue!:

PS Sorry for delay today:
a AM/PM error
Posted by BobTheScientist at 19:14