Back in January I wrote note to self: more willow cuttings needed . . . to protect our bank of the river from further flood-damage erosion. But notes to self are much less useful than actioning the thought. And it turned out that, back in Jan I had at least one eye on future forest. While dismembering the fallen trees and sorting into brash vs fire-wood, I had sidelined a couple of bags for straight willow branchlets. These scions I brought back home and dumped, cut-end down into a bucket of water. That worked a treat. Willow Salix spp. typically tolerate a good deal of wet in the ground and will naturally root if a leaning branch comes into contact with wet soil. They say that you can leverage this natural tendency to root as a source of natural ?woowillow? rooting hormone.

As Winter turned over to Spring, knobby white rootlets could be seen poking into the water of my propagation bucket. We had all the descendants on site over Easter. They tend to be champing at the bit to be useful about the property which is a boon and a blessing. The Boy was very happy to carry the now-rooted willow whips down to the river, while I carried the iron spike for making holes in the bank into which they might be popped. 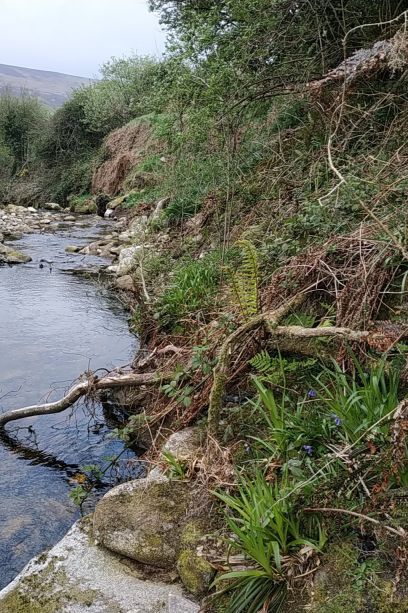 It really only took a few minutes and now we have a couple of dozen incipient trees, running along maybe 20m of bank, ready to fight their corner against all comers. I reckon they won't fight too hard against the blue-bells Coinnle corra Hyacinthoides non-scripta and white campion Coireán bán Silene latifolia which currently cover the bank below the badger sett. But their task, for us, is to contribute a dense tangle of roots to retain earth and small stones against the rushing water. It doesn't look very rushing in the picture above: it would be hard to get the water to over-top your wellingtons. But after a spill of rain on the hills this quiet beck becomes shoulder-deep maelstrom which carries all before it.  Side note: I explained the non-scripta part of the bluebell's name at the birth of The Blob.