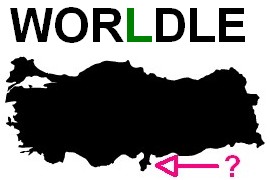 The challenging flubbers of bare flesh hanging from a turkey's [Meleagris galloparva] neck are a) called wattles b) something else entirely. Today we address [a small but politically significant part of] the country which straddles Europe and Asia. Time was that Turkey aspired to join the EU, as it had been a key member of NATO - joined 1952. The idea of Turkey joining the EU got a lot of side-eye from Greece which has had issues with the Turks since Byron or Smyrna. Turkey was the clue/answer to Worldle last Thursday [see R]. When you rip an outline map from its context, it exaggerates any distortions in the border - as recently Lithuania. Thanks to my very expensive education, I got Turkey.worldle in one go - hint: looks like a brick and there is Gallipoli and the Dardanelles over in the NW. But WTF is the dong-shaped penisula halfway along the South coast? A: not a peninsula at all!

It is a chunk of land, but only its Western border is wet. For 170 years from 1098, it was part of the Crusader Principality of Antioch and eventually was subsumed into the Ottoman Empire. After WWI, The Empire was stripped of everything that could be considered a colony, with these bits gobbled up by France and Britain as "Mandates". France taking what we now known as Syria and Lebanon, with the Brits shouldering the burden of Palestine and Iraq.  The Mandat pour la Syrie et le Liban was a real melting pot: mostly Arabs, but also Kurds, Turks, Assyrians, Armenians, Circassians, Mandaeans, and Greeks. Religious groups include Sunnis, Christians, Alawites, Druze, Isma'ilis, Mandaeans, Shiites, Salafis, and Yazidis.  The administration divided their territory up into 5 States centred on Aleppo, Beirut, Damascus, Latakia & Swaida. Some of these places are household names in the West after years of bloody sectarian and internecine conflict. Others less so because our news coverage and education is partial in both sense of that word. From 1923 to 1939, the NW corner of the Mandate was promoted to an autonomous Sanjak of Alexandretta; at least partly as a sop to the new state of Turkey and the ethnic Turks who made up a substantive minority in that micro-region.

As the World shaped up for War again in the 1930s, France had realpolitik reasons for keeping Turkey sweet with The Allied Powers rather than, as in WWI, throwing their lot in with the Germans. The French were also trying to divest themselves of their Mandate territories in the Near East as soon as she deemed them to be sufficiently evolué to manage their own affairs. In 1938 the Sanjak of Alexandretta was rebranded as Hatay State aka The Republic of Hatay. And the following year, the Turks finessed a plebiscite to determine the future status of the province.   On dit que the plebiscite was packed with ringers who were no longer domiciled in Hatay. Whatevs! the count brought in a majority in favour of [re]joining Turkey and the area was annexed by Turkey on 22nd July 1939. The President of Syria resigned in protest but the French barrelled on regardless - their minds distracted by events along their own border . . . not to mention the Anschluss Österreichs in March 1938 and the Munich Betrayal of the Sudentenland in September 1938. 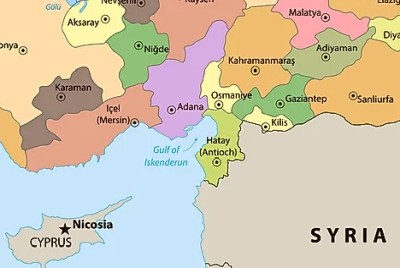 And that, kids, is why Turkey occupies both sides of the Gulf of Alexandretta aka İskenderun Körfezi.