Most mornings for a while now we [me, Dau.I the Librarian, Dau.II O'Sporcle] have been playing worldle a guess the country from its silhouette game. We'll all be ace at any political geography jigsaw now. Easter Monday, I was less ace than my "very expensive education" average: 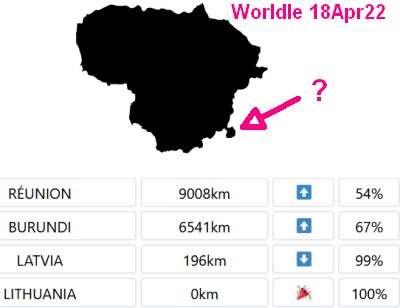 I was able to do better on an earlier Worldle of Bouvet Island because Bouvet had been blobbed. In my guess with Réunion, I was attempting to relive past gloire by having a punt at another speck in the Southern Ocean. But anything can be grist to the Blobbomill and I was intrigued by the skin-tag attached to the SE border of this new geographic entity. Indeed, believing that it might be a sea-stack tipped my first thoughts towards "island nation".

But, in this case, we are staring at a political rather than geological feature called the Dieveniškės [Polish: Dziewieniszki, Belarusian: Дзевянішкі] "appendix" extending to 200sq.km. I'm giving three renderings of the toponym [all of which mean God's Place or maybe Layers of Red Sand] because the region shrieks ethnographic melting-pot on a par with Breslau=Wrocław [prev]. In the late 19thC, 75% of the inhabitants were Jewish but they were all killed in the second half of 1941, immediately after the Nazis rolled the Soviets out of the Lithuanian SSR. The Soviets rolled back in during 1944 and within a couple of years most of the local physical attributes of national border were taken down or allowed to decay. 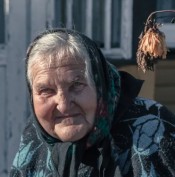 That left a few hundred small farmers [like Katija Stankiewicz L] mainly Poles but with minority Lithuanians and Belorussians. The Roads and Kingdoms blog made a rather good post about the semi-clave in 2016. In the midst of the Soviet era in 1956, after a resident's petition to the central praesidium, Dieveniškės was reassigned to the Lithuanian SSR despite being almost entirely surrounded by the  Belarus SSR. This made very little difference to the subsistence economy of the inhabitants and neither did the collapse of the Soviet empire in 1991. But the accession of Lithuania to the EU, and Schengen, in 2004 required a physical barrier between the EU the alien hordes of Belarus. In 2007 a chain-link fence was erected which meant that Katija had to make a 90km trek to have official tea with her sister on the other side of their village. That seems a poor outcome for poor people.