The lens of history

Interesting juxtaposition on the Main Page of Wikepedia today [L].  If you're on holiday in Greece don't ever be tempted to wind up your delicious meal with a 'Turkish Coffee': the waiter may well serve it in a 'dirty' cup. Apparently, the stories of catering people gobbing in the soup of objectionable customers are greatly exaggerated; but why risk it?  Every Greek delicacy on the menu on the island of Kalymnos Κάλυμνος  will have an almost identical counterpart on menus in Bodrum, 30km East on the mainland. Some hold that there is far too much culinary chauvinism which is unhelpful for food historians and reasonable people who yearn for a beaker full of the warm South. 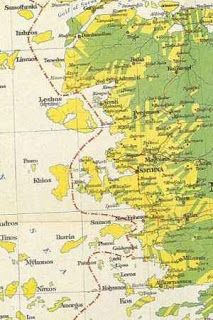 "The Greek Kingdom and the Greek diaspora in the Balkans and western Asia Minor" according to a 1919 Greek map submitted to the Paris Peace Conference [L clipped from larger map of the area]. Today 19th May marks the anniversary of Mustafa Kemal Atatürk's landing at Samsun / Αμισός on the North coast of Turkey to start the Turkish War of Independence which is known in Turkey as Kurtuluş Savaşı the "Liberation War". In 1919, the region was a political and economic basket-case. The Ottoman Empire had been known as the Sick Man of Europe by such players as Czar Nicholas of all the Russias Николай I Павлович from as far back as 1853.  But, you wouldn't trust Czarist Russia (or their French and British rivals for hegemony in the Near East) for an objective assessment of the state of the Empire's health.  The Turks won the Crimean War (with a bit of help from the Brits and the French and Florence Nightingale [prev]) in 1856 and the Gallipoli Campaign of 1916 (Brits and the French on the other side this time) but had lost the war by 1918 and the Victorious Allies were determined to dismember the Ottoman Empire and allocate wide swathes of it to themselves. In the War of Independence, the Greeks waded into Thrace and Western Anatolia to protect "ethnic Greeks" and secure a bit of pie for themselves. Bodrum was after all known to Ancient Greeks, including Herodotus who was born there, as Halikarnassus Ἁλικαρνᾱσσός. Even as WWI proceeded the Turks had forcibly shifted some of these people from their coastal patrimony East of the Aegean to the interior where they couldn't aid and abet the enemy. During the Liberation War, much ugliness occurred and the modern consensus is that ethnic cleansing was part of the process. The map shows areas which are essentially Greek [yellow], essentially Turk [green] and a mix [hatched], it was generated by the Greeks so should be read with your skeptical hat on.

The lens through which these same historical events are viewed is not commutative for present day Greeks and Turks. The latter rejoice that, for 100 years, and largely through the peculiar vision of Atatürk and his pals, they have been living in a modern predominantly secular society with aspirations to join Europe. The last Emperor was deposed and the Caliphate was closed down. The Greeks would rather remember and remember and remember the disaster of the early 1920s which was brought about, at least partly, because of the hubris and delusion of their leaders; and the internecine feuding didn't help! Hemingway wrote some shocking reportage from Smyrna/Izmir as the Greek army in defeat evacuated the port. As they left, the first squadrons of Turkish cavalry were entering the suburbs. Thousands and thousands of Greek and Armenian refugees were crowded along the water-front hoping for a boat that would never come. Four days after the army left, a huge conflagration broke out on 13th September 1922 and in the ensuing chaos, somewhere between 10,000 and 100,00 civilians [uncountable numbers, basically] were killed. Smyrna lost any chance of remaining a Greek city and became definitively Izmir. Greece retained most the Aegean Islands, even those which, like Kos, where a) far closer to Turkey than Athens and b) not demonstrably Greek in population. I've written about modern Kos last Autumn as the Gateway to Refugee Europe.

Oddly, much further North, Imbros Ίμβρος and Tenedos Τένεδος [See map above] were assigned to Turkey despite being almost exclusively inhabited by Greeks.  This was to suit geopolitical pressures because Imbros in particular stood across the Dardanelles. The cultural integrity and autonomous status of the Imbriots was guaranteed by the Treaty of Lausanne (1923) but there are only 300 left out of a populations of 8,600 for the island.  Which is, incidentally, now known as Gökçeada. A series of decrees from a central government made it increasingly difficult to maintain Greek schools, Greek farms and Greek holidays, so many Imbriots packed up and left.

I suspect we'd all be a lot better off if we didn't know anything about the ethnic background of our neighbours. It is far more difficult to wheel out the prejudice if this information isn't recorded. The Finns are resolutely ignoring ethnicity on their censuses. If you don't know how many black people you have then you cannot legislate to treat them differently.   And before my Yankee-dog readers get too smug you should reflect on your recent ancestors' treatment of ethic Japanese, even unto the second generation [google Nisei if you haven't read Snow falling on Cedars by David Guterson] during WWII which is a generation more recent than the doings in Smyrna.  And my loyal Russian readers should reflect on the subject matter of the winner of this year's Eurovision Song Contest 1944; which hinges on the forcible migration of Tatars from their home in Crimea to Uzbek SSR "because they had collaborated with the Germans".  But the correct response is not to get the knickers all in a twist and say that Ukraine is deliberately "offending Mother Russia". Might it not be more helpful so say that we are 25 years into a radically different political regime and it's +70 years since the events in question, so anyone actively engaged in the policy or implementation of ethnic "migration" is long dead.  Nothing to see here, time to move on?

Now here's the weirdest thing. It turns out the today is Atatürk's birthday.  The cute hoor timed the start of the revolution to conflate his birthday and the birth of the republic in everyone's mind.  At the Atatürk museum in  Şişli near Istanbul they have on display, amongst many other artifacts associated with his life, His Underwear.  If anyone thinks "I have his shoe, the shoe is a sign" I suspect you'll be in good company. A quote from The Great Man is in order "Humankind is made up of two sexes, women and men. Is it possible for humankind to grow by the improvement of only one part while the other part is ignored?". I covered "his" quote about the dead of Gallipoli last year.
Posted by BobTheScientist at 16:46