We had a really dry January: maybe ⅓ the last ten years average. Feb and March were situation normal all rained up SNARU as expected for Ireland. But April was parched - except for Easter Sunday morning when we all got sopping in the drizzle during a woodland egg-hunt. This is great because it means I can yomp up the hill in my runners so long as I avoid the known seeps and wet draws. But it's not so great because the heather is like tinder and last year's bracken is dying drying lying all over the hillside. Traditionally, this has been a good time to set the heather blazing: clearing off the thatch and allowing fresh green sheep-feeding shoots to get their heads up. Prev on the far side of the valley. Me, I sternly disapprove of burning as an unsustainable nutrient-depleting practice. It grills the microbes too!

Earlier in the month, immediately after the two wet days that were in it, I was down by the river planting willow whips to help stabilize the bank against the floods which will, inevitably, return. That was a +++ for the carbon footprint budget. Last Thursday night, contrariwise, some person or persons unknown, took advantage of the dry weather - and  darkness  - to apply accelerant to the commonage next door and set the whole hillside on fire. Over 36 hours, scores, possibly hundreds, of hectares of heathland were reduced to a dusting of grey ash spiked with black twigs. It was big enough, orange enough and unexpected enough that one of our neighbours called the fire-brigade. These lads spent several hours full hazmat on the hillside, doing their best to minimize the damage. My couple of dozen willows weighs as a gob of snot against a blast-furnace in the carbon footprint scales. KnockMordor: 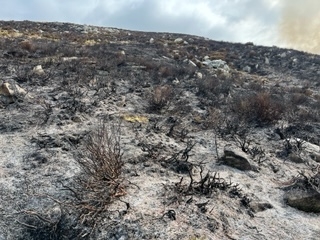 Because our home turns its back to the hill to take advantage of whatever sun is available, all this drama passed me by as I slumbered. But I was sitting on the stoop Friday forenoon and another neighbour paused to say that they were organising a meitheal to stomp some fire that afternoon. It seemed absurd to be aware of the problem and wait another 2 hours to be part of the solution /mitigation, so I gobbled an early lunch; then seized a long handled shovel, 2 litres of water, binoculars and a sun hat and sallied forth: 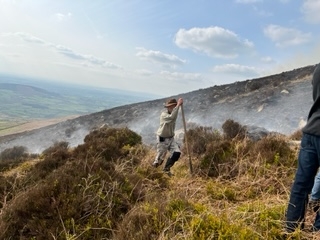 By the time anyone else rocked up [these farrrmers are all busy lambing], I had beaten into submission a section of fire-front maybe 75m long. And fakk! I was knackered. But we soldiered on, the wind backed, we got the SW section of the conflagration down to code smolder, dealt with the recidivist flare ups and called it a long thirsty arvo at 6 pm. This is a job for young knees and a work-outed upper body; sofa surfers need not apply. 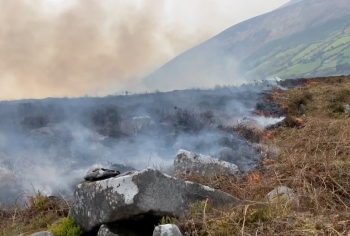 What about the arsole? you may ask. Not this Arsole (C4H4AsH), but . . . Word on the street is that, for the second year running, our common has been targetted out of spite by owners of other local commonages who didn't get dibs on a pot of Brussels money to be part of a pilot project to repurpose and sustainablize European uplands. I can see where such a sentiment might come from - pity about the collateral damage to the heather, insects, worms, microbes . . . and people who like to walk the hills in white linen.

Here's a nice planting story. Martin Neary is planting both himself and some thousands of trees on his Mayo farm.