A few years ago, I wrote about a neighbouring child dying in her cot and how it changed how I thought about marmite. Cot-death, sudden infant death syndrome, SIDS is not common but loss of a life which is all to do and no sin seems more tragic that one like mine: all done and has son. The best thing to do to ensure the kidder reaches their second birthday is to put them down to sleep on their back. The UK NHS has a dribble of other advice, none of which has the equivalent impact.

Obvs, we the scientific community would love to do something about a) understanding and b) eliminating SIDS. Unfortunately, the journalistic community wants such a cure even more than scientists; even more than there is evidence to back it. A case of unqualified carolling about the end f SIDS was flagged on MetaFilter a couple of weeks ago. A number of research labs are engrossed with the problem and such commitment develops its own dynamic. Young Bobby Postdoc has been making progress but needs a deliverable if the funding is to be extended. A typical post-doc contract will be for two years: it will require above ordinary dedication, competence and luck to generate a top-tier paper in 2 years from a standing start. Labs and their leaders are being driven to put the most positive gloss on whatever results are to hand as the next funding window looms. And the host institute will have a publicity and propaganda department ready to turn any new or vaguely interesting finding / discovery into a Story.

The next ring out from the frog-plop of a good result in the lab, after the Press Release, is The Press who also have their own vested interest in generating clicks or page-views to ensure that Journos continue to put bread on the kitchen table and shoes on their kids' feet. All this makes for a Headline which may be a long way from the evidence. So we get Biospace claiming that "Researchers Answer How-and-Why Infants Die FromSIDS.  After a twitter storm about this over-egging of the pudding the headline was toned down: Researchers Pinpoint Important Biomarker for SIDS - Updated. And there is another ring of lazy-arsed journalists who only bother to read the Biospace executive gloss and use that to make a great leap in some other dramatic direction. MeFite dst flags the key twitter thread which pours cold water on the press puffery. 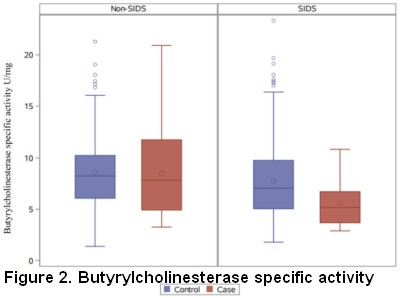 Now there may be a statistically significant difference in the levels of the enzyme butyrylcholinesterase (BChE) in SIDS kids vs survivors which may result in different levels of the neurotransmitter butyrylcholine [BCh a fatter sister molecule to acetylcholine ACh of whc multibloboprevs] in regions of the brain which control sleep and arousal . . . but this paper out of The Children's Hospital at Westmead NSW, Australia, is not great evidence for such a hypothesis. And what should anxious parents & pediatricians do with the information? There is so much overlap in BChE activity that there will be false positives with whatever threshold you pick for an assay. Hundreds of extra families will spend months on sleep-depriving high alert because young Timmy has lower than trigger-threshold BChE. It is definitely not clear if the level of BChE is the cause of SIDS or a response to an underlying, as yet undiscovered, malfunction that is the real cause. More work needed.