In 1966, a young Ethiopian was studenting in NW England when she fell pregnant. Her son was born in March the following year and shortly thereafter the student had to return to Ethiopia after a death in the family. The baby was left in the care of Wigan social services. The first half of his minority were spent as Norman Greenwood fostered by Mr and Mrs Greenwood, devout and rather doctrinaire Baptists. They couldn't adopt the child because that would require consent from the birth-mother, who was uncontactibly abroad. The Greenwood's believed that they treated young Norman as one of their own children but that wasn't really true. To do that, the parents would have to be a) much kinder than most of us are b) oblivious to the actions, reactions and prejudice of their community.

The story is related in My Name is Why? by Lemn Sissay, my latest Borrowbox audiobook. Guardian review. Young Norman was a sparky, super-friendly, sporty, outgoing child. Energy and openness that is adorable in a boy can take on a different complexion when that same person <teen alert> starts to think for themselves, challenging the roles which everyone seems to be playing. We don't hear directly from the Greenwoods, but the book intercalates the boy's narrative memories with excerpts from his fat, partially redacted, dossier from Social Services. Wh'evs, rather abruptly, when Norman was 12, the Greenwoods decided they didn't want to play any more and requested-and-required that the fosterling be removed from their home before Christmas.

Norman's life spiralled downhill from there: untimely ripped from the bosom of the only family he'd known, he was shunted through a variety of residential homes in Wigan challenging the status quo. Being minded by people who had their own issues and troubles and who were increasingly poorly resourced as the Thatcher-Tories worked to dismantle the welfare state. It wasn't a great place for a troubled youth but social services stoutly and smugly believed that he was better off with them than in, say, Ethiopia. He, au contraire, was determined to celebrate his Ethiopian heritage . . . with ganja; but also by discarding Norman Greenwood and going by Lemn Sissay, the name which he'd been given by his other before she bunked off.

He spent the last several months of his childhood marking time in the Wood End remand centre; where the most troublesome = troubled youngsters were subjected to institutional bullying, sexual and physical abuse on a daily basis. The thing is that employees of such places are not conscripted from the general population but rather self-selected from among those whose sense of self depends on being alpha cock on the dunghill.

At the age of not quite 18, partly through his own determination and partly because specific people working for social services were prepared to support his attempts to fly solo, Norman was airlifted from Wood End and installed in a council flat to mind himself. At the same age, both Dau.I and Dau.II in turn left home to make their own way in the world. They were able for that because they'd been brought up in a secure, safe and loving home, embedded in a wider community of tolerant, supportive and caring adults. No chance of a council flat for them, though; the aspiration that we should all care for the dispossessed has gone the way of flared trousers. Inevitably, because I've read both books, comparisons can be made between Lemn Sissay's memoir and Mark Hodkinson's hard enough tale of growing up the other side of Manchester, at about the same time. 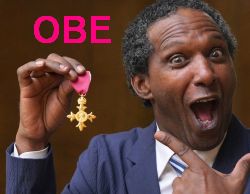 The boy done good, though! Lemn Sissay was given an MBE in 2010 and appointed Chancellor of Manchester U in 2015. This year, his MBE was doubled up to an OBE. He has become a bit of a celebrity as a writer, television personality and public commentator. A Desert Island Discs personality. But it's not good enough to point at Mr Chancellor Sissay OBE and believe that anyone can pull themselves by their bootstraps. But that's just not true!: escaping from the underbelly of society is the exception. Only exceptional people can achieve success [however defined] from such unlikely beginnings. But they also need the breaks! A little luck; a little mentoring; someone who'll take time, make an effort for someone else. And while we're about it, can we remove broken people from being in a position of power over children? Thanks, that would be a start.