Dau.I, the family [photo] archivist, was home over Easter and showed us a 2005-dated photo of our polytunnel covered in [super clear] plastic. That really helped nail down the date: pre-Blob documentary evidence is rare and patchy. The tunnel is therefore almost old enough to vote! But like dogs, polytunnel years are not the same as human years and, like me, the tunnel is feeling its age despite having only 25% of my calendar years. Accordingly, in March we went on a jaunt to Highbank to scope out the cost of replacing the plastic. Polytunnel tech has moved on since 2005 and wooden frames are now considered supremely out of style. We got a blizzard of information about the New Way with polythene fixin's. Although we still agreed that a total re-cladding was required, enough unresolved logistical questions hung in the air that we put the whole project on hold. Eventually I called my tunnel-mentor Rene to have him explain the difference between Richel double clip rails and single Richel clip cladding rails and why the latter might be 3x the cost of the former. A few things became clear: 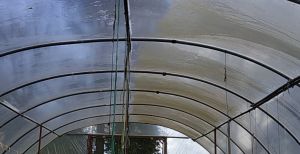 Being a highly suggestible sort of bloke, it was easy enough for Rene to convince me that a good clean was the way forward and it would be a shame to dump out all that plastic for landfill. And, more importantly, with care and attention, there might be / should be years of life left in the ould tunnel. R and his pal K came up on Wednesday [midweek! when - I R retire - I didn't have to be at work offsite] with a vanload of hosepipe, brushes and power-washers and started to clean years of gunk from the top of the tunnel.

I haven't been totally remiss from cleaning what I can reach with a 3.6m long-handled brush. It's a lot like the nun's instructions for bathing in a shift "first you wash up as far as possible, then you wash down as far as possible; then you wash possible". As our tunnel is 13m over the hoops, I've never been able to wash possible on my own. One time many years ago, The Boy and I tied ropes to the 4 corners of a very old foam-rubber-stuffed floor cushion, waited for a good wet day and did push-me-pull-you back and forth along the length of the tunnel. It was really difficult to clean the high-points over the hoops because the cushion would slide inexorably down into the inter-hoop troughs. You can see the contrast [above L] when K got his head higher than the tunnel top and applied a proper industrial window-cleaner's brush with skill and vim: L.L. after his attention to detail; L.R. awaiting his ministrations. 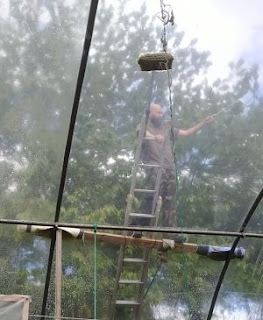 And here is K himself advising me that the plastic will soon be clean enough to see, not only the hill on the far side of the valley, but the pixel sheep that dot its flanks. And it was so. More light brings out the best in the look-and-feel of the tunnel. But it must also be acknowledged that The Beloved and Dau.II (who was visiting) really cleared the decks inside, so that the boys could have a clean sweep at the task. Imagine how red would be our faces if K tripped over a lawn chair or a bag of potting compost while staring fixedly upwards as he pounded his brush against the interior dust-layer.  The prognosis seems to be that we are good for another year . . . and another. Until we have a dramatic event like Darwinday 2014 which tore the plastic from its moorings.  As a manifestation of good faith in old plastic, one reason for washing the stuff, while it is still spread out and taut, is that it will defo get reused / recycled if we decide to go with new.

Having clear as glass plastic is a mixed blessing. Wood pigeons Columba palumbus are hardly the smartest beasts on two wings. Yesterday I disturbed one in the tunnel and it flew up in a flap - WHUMPHing in to the plastic . . . repeatedly until I seized it with both hands and showed it the door. Not unlike our testosteropsychotic window thumping blackbird; maybe it's something in the water hereabouts? One reason that we might have a random pigeon lost in tunnel is that it is The Year of the Pigeon. Our trees, which usually support a couple of pair, are hosting a couple of dozen pair in 2022. Who knows why?