I've been paragliding, I even caught a thermal and almost lost my lunch. Then I had a bad take-off, landed hard and [it subsequently transpired], broke two ribs. It's 20 years ago, and I have no intention of having another go to get airborne. 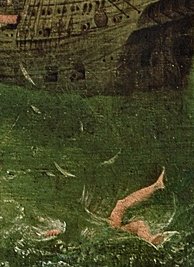 Toby Ferris has been paragliding too. His Short Life in a Strange World Birth to Death in 42 Panels is my current audiobook. The conceit is that,
because he is 42;
because his father was recently dead at 84 [2 x 42];
because Pieter Bruegel the Elder's entire oeuvre is 42 attributed works
because Toby has two young sons himself
. . . he feels compelled to open the doors of perception, stand in front of each publicly accessible Elder Bruegel and reflect on life, death, the Universe and everything. No postcard, or arty book need apply - it must be a several years road-trip to be there. More Bruegel-inspired writing.

The first picture for such intense contemplation is Landscape with the Fall of Icarus painted in ?1558? and currently viewable at Musées royaux des Beaux-Arts de Belgique, aka Koninklijke Musea voor Schone Kunsten van België. Icarus himself occupies only a fragment of a Narnia like landscape and in deed only his legs and a drift of feathers appears above the wave - Bruegel has made him a shocking but incidental, distant, event in the broad sweep of late-medieval normality.  The painting whooshes Ferris back to his paragliding days when a more experienced, divil-may-care member of his group foolishly larks about while aloft swinging wildly beneath his canopy . . . until he spills all the air from his vital support and plummets to earth; landing with a reverberating thump, on his back, in the gorse. Fantastically he is not dead or even seriously injured. although he spends many weeks in hospital recovering from the results of his folly.

Actually, The Fall is not nowadays believed to be the work of Bruegel de Oude, but rather a copy of a Bruegel original; indeed maybe not even that. But details or attribution should never stand in the way of a great story of real life imitating art. Indeed, the existence of many copies of many certain-sure Bruegel have been valuable in abstracting meaning and de-layering the palimpsest of a work of art. There are, for example, no innocents in the original of the Massacre of the Innocents, all the slaughtered children have been over-painted as sheep, or parcels, or geese. But the full monstrosity of the tale is in your face [and heart] in many of the numerous extant copies. Many of these copies were generated by the atelier of Pieter Breughel the Younger, a man with more acumen at cashing in on his father's legacy than actually applying paint to panel.

Short Life in a Strange World [excerpt] is a find, in that I chose it, because available within a month, after scrolling scrolling scrolling through the finite catalogue of audiobooks available on Borrowbox. It works fine in the ear: I've had it along for the ride walking the hill, washing the dishes, doing the messages and is not too much of a loss that I can't see the the picture described in such obsessive insightful detail. You may get a little TMI about the issues & peculiarities of the Ferris family but maybe that will encourage you to look at the dysfunctions of your own tribe. For a man born just about 500 years ago, Bruegel's reflections on hatching, matching and dispatching haven't become a whit less relevant.