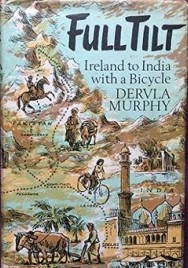 I think, with hindsight and a little smugness, that I'm pretty buff for walking alone 700km up the Atlantic coast of Portugal at the age of 35. But that was a stroll in the park compared to the journey Dervla Murphy made from Ireland (Lismore, Co Waterford) to India (Delhi, Co Punjab) a quarter century earlier. Murphy was then 32, the Winter of 1963 was bitter cold, and she cycled alone [only one gear too!] more or less 10x the distance. On arrival she toiled for some months caring for children in a Tibetan refugee camp. She wasn't a stranger to cycling having made trips from Lismore to Paris and Barcelona as respite from looking after her invalid mother, crippled by arthritis, and her radical-in-some-dimensions but still patriarchal father. She wasn't able to make the longer journey until her aged parents had checked out. But Western Europe in the early 60s was safe for lone female travellers in a way that, say, Azerbaijan was not. She had to boot a Azeri policeman in the balls to slow his "intentions" in a locked room in that, then Soviet, country. In Afghanistan she got caught up in a brawl and had three ribs stove in by a rifle-butt . . . but carried on cycling for several days before checking into a hospital. While whizzing around Delhi on Rozinante her trusty steed, she attracted the notice of Penelope Betjeman, wife of the future poet laureate. That encounter networked her first publishing deal with John Murray who published Full Tilt in 1965.

She left the bike behind when she lived In Ethiopia with a Mule, published, again by John Murray, in 1968. That same year she gave birth to a daughter Rachel whom she raised as a single mother because the child's father was already committed elsewhere - in the Dublin literati scene. Part of that daughter raising resulted in Eight Feet in the Andes 1983 - further travels in Peru with a [different] mule and 9yo Rachel. You can't call Dervla "brave" - she disliked that term because it requires overcoming fear and she professed to be fearless - so brave and courageous didn't apply to her. Altogether her oeuvre consisted of a couple of dozen "travel" books reporting her views from an alphabet of countries on four continents.

Travel books are mostly constructed, rather artificial, records of knob Y who goes to exotic place X, eats local food, gets the shits, recovers, encounters poor people who are invariably hospitable, has adventures in souks and at border crossing and returns home to write it all down before memory fades. It's easy to carp at the genre and its creators. If authors have been published before they'll get an advance from the publisher which might cover some flights and accommodation. And if the book gets puffed by Oprah or Richard&Judy, the author adventurer may secure some royalties that make life easier. To be frank, some of the adventures are rather thin and these books are only tolerable if they are played for laughs. Peter Fleming, Eric Newby, Redmond O'Hanlon and Bill Bryson, I'm looking at you.

Raja Shehadeh from Palestine [cited below] reckons that Dervla isn't pot-boiling it for the money "I never do taxis, I always take the bus" but rather is embedding herself in an alien culture because that's, like, more interesting than Lismore. And, heck, life is short, the world is wide, and why not step out if you can swing it? I never met, the famously private, Dervla Murphy but was in speaking terms with Joyce Green, the woman who looked after the many dogs when Dervla was off on one of her foreign jaunts. Joyce was an interesting person in her own right who lived just across the county border near Castlelyons, Co Cork. She was besties from childhood with my father's Cousin Posy.

Well, I'm sorry to report that Dervla Murphy died, aged 90, at home on Sunday 22 May 22 and is buried in St Carthage's, Lismore. Hats off