Science is about finding out. It really makes little odds what scientists study: just let 'em at it. Because the hunt for this thing I have found out is rather a poor predictor for this discovery is a manifest good. Attempts by government, patrons or sponsors (who know bugger-all about science) to guide, let alone dictate, how scientists should spend their time generate a rather poor return on investment. I spent my 20s in a quixotic pursuit of those furry bags of genes known as cats. Not to pet or use to catch rats; but rather to document their variation and see what this could tell us about human [and cat] migration patterns. In my defense, I will say that documenting the coat colour of some thousands of cats from both sides, and the middle, of the Atlantic Ocean cost very little money. Much less than I flushed down the lab sink and spattered over my face during my 6 months of doing real science in a molecular biology lab.

My 'expertise' in the genetics of cat coat colour came back to bite me when Dick Ahlstrom and Aoife McLysaght launched a crowd-sourced investigation of genetic variation in cats in 2015. With results. And much more recently, it transpired that our data from the Azores might be relevant to explainthe peopling of that archipelago by . . . vikings. Normal science is when you spend a few decades doing what your PhD thesis supervisor taught you to do: using the same familiar techniques to crack ever smaller nuts. It can be comforting in a religious practice sort of way - decades of the rosary essentially the same as repeated runs of the PCR machine.

I was careless and clumsy in the laboratory, even when I wasn't being a danger to myself and others. So I was better off on the streets clocking up a tally of feline field notes. When it was raining cats and dogs - and therefore no cats would be out on the streets to be clocked - I was happy to ring the changes in the library reading about New England settlement patterns, or the development of the canal network in Britain and Ireland. I recently mentioned an ancient library search which came to no conclusive end about tailless cats in New Brunswick. 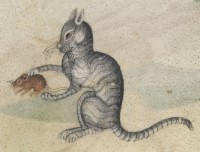 At the very beginning of my career as a researcher I took advantage of the extensive library of Trinity College Dublin to document the existence of mutant genetic variants more than 1,500 years ago - before the Vikings indeed. I discovered that there was a late medieval translation into Englyshe of De Natura Rerum [On the Nature of Things] which was compiled by the saint and scholar Isidore of Seville in about 600 CE. What floated my boat was that Isidore described the colour morphs of cats that were familiar to folks living in Andalusia all those years ago. Some catte is whyte . . . etc. With my knowledge of Mendelian coat colour genetics, I was able to show that certain allelic variants had been around at least that long. I wrote it up as a note for Carnivore Genetics Newsletter C.G.N. and this insight / angle / result has effectively sunk without trace!

All this backstory about me interfacing Science with The Arts Block is merely softening you up for a right nifty story about using still life paintings of know provenance and age to establish not later than baseline for the appearance / development of known varieties of produce. Ive De Smet, Plant geneticist, and David Vergauwen, art historian, were intrigued by fruit and veg, plainly intended for eating just as soon as the artist had finished his daubs, that appeared in still lives from the early modern period. That's when technique, training and materials had developed to the extent that painters aspired to create photo-realistic images from a reality they could see . . . and smell. 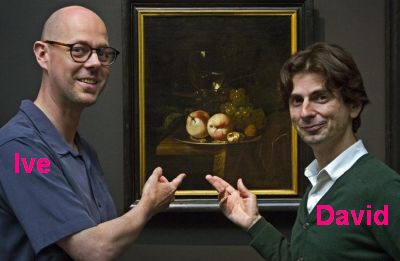 Ive has a sciency set of tools at his disposal, DNA sequencing can reveal biochemical pathways essential for producing flavor compounds [bananas = amyl acetate etc.] and molecular clocks can estimate the time these traits  were acquired by counting the changes in the DNA since the last common ancestor. But the parallel Art project requires someone to stand in front of a given still life and determine whether tomatoes are present and, if so what colour they are. Browsing a catalog on-line just doesn't have enough detail to be diagnostic. Volunteers sought! chekkittout:
#ArtGenetics on Insta or on Twitter.