Baron Cuvier (1769 - 1832) confidently maintained that, from a single fossil bone he could infer the entire skeleton . . . and by extension a great deal about its life-style and diet. Archaeologists do this all the time: four rocks in a rough circle, dusted with charcoal, becomes a hearth; a chipped flint becomes an arrow head . . . which infers a bow - which points to carnivory.

My latest random book from the library is How to Think Like a Neandertal,(OUP, 2011) by Thomas Wynn [anthropologist] and Frederick Coolidge [psychologist] reviewed. You might think that a rather optimistic brag, given that all we have to go on is a suitcaseful of Neanderthal skulls. On average these have a larger endocranial volume than the average [1300cc] among "modern" humans. But we know that a bigger brain doesn't correlate well with intelligence. Lord Byron [2000cc] was not twice as smart as Anatole France [1000cc] and certainly not more compassionate.

Wynn and Coolidge both work at U Colorado, although in different departments and had been working  together on the evolution of cognition for ten years before they published their book on Neanderthal thinking. Many of their arguments hinge on the fact that the last common ancestor between humans and apes [Pan troglodytes, chimpanzee, is our nearest and dearest] was ~5 mya while between us and Neanderthals there is only 0.5 my. We are accordingly much more likely to have behaviour, practice and thinking like Neanderthals than either of us are to chimps. You can do quite a bit of lifting with that assumption. 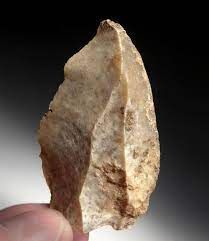 If you do free-association with paleolithic hunter-gatherers then caveman is likely to pop into your head. The key thing is that a lot of human [both species] burials have been found in caves. That's partly because other burials: out in the bush, say, are much less likely to have survived. But it's also because lots of these caves have hearths and some have paintings which indicate that humans lived and slept in caves. The in-the-knows of the anthropological world are certain sure that no ancient art works are the work of Neanderthal hands. Work-a-day, functional worked stone axes yes; paintings and sculptures nope. No great ape ever sleeps in a cave because they habitually sleep off the ground in trees - usually constructing some sort of nest to do so. There are obvious advantages to sleeping up a tree if there are predators in the area which have bigger teeth and sharper claws who might fancy eating a small primate if such a dish was available on the ground. BUT when you sleep you lose consciousness and are prone to fall off your perch.

Several adaptations to this state of affairs have become fixed in our species because proto-human apes without those adaptations took a tumble and didn't leave any descendants. One of these fixes is REM paralysis which, in normal people and apes, disconnects the motor neurons when REM sleep starts. That way we can have vivid dreams of chases and extravagant sex without, like, acting them out with a thrash weeeeeeeeee CLUNK! We've never seen a Neanderthal sleep but Wynn and Coolidge [and me] will bet Lombard Street to a china orange that they also experienced REM paralysis.

But Wynn and Coolidge continue to push the idea that Neanderthals are totally on top of procedural tasks like making Levallois stone points, hafting a spear with the best, and hunting down a mammoth for a [mammoth] feed. BUT, they spent 400,000 years making the same-old, same-old paleolithic tools. Modern humans otoh were creatives. Mesolithic people invented nets, weirs and hooks for fishing; probably canoes and paddles; birch-bark containers; textiles from plant fibres; microliths assembled into longer sharp edges as sickels. Primitive stuff I guess, but Neanderthals were not invited to the party.

REM sleep is coincident with dreamtime and dreamtime is powerful magic for creative thinking. The events of the previous day are jumbled together and re-assembled to try to make sense of the buffets of an unpredictable world. Leaving trees and sleeping in caves allowed for longer periods of sleep undisturbed by anxiety about the big tumble. More REM! More creativity! So Neanderthals didn't sleep in caves, but only cooked there? I R Confuse! I could go back to re-read the final chapters of How to Think Like a Neandertal with furrowed brow and more care and attention. Then again, I could not: life is short and the actual data about Neanderthal cognition are few and far between. Drawing plausible arguments, like from rabbits from a hat, don't cut it, especially if the result is to give Neanderthals consolation prizes for pretty much everything and not really acknowledging that, for half a million years, they held their own: living, loving, and lounging around. A different sort of success without agriculture, bell-ringing, cash, dogs, exercise bikes, fajitas, gold, harpsichords, iPads, jigsaws . . . and a despoiled planet.